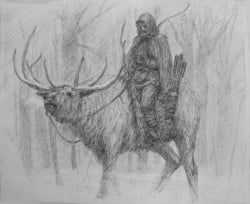 Coldhands astride his great elk - by Marc Fishman ©

Bran is making his way through the haunted forest, in search of the three-eyed crow, accompanied by the Reeds, Hodor, and Coldhands. Bran skinchanges into Summer frequently, and even into Hodor, although Hodor seems to dislike the experience. Coldhands is riding on an elk and is accompanied by ravens. Jojen is becoming ill and weak.

Coldhands stops to deal with "foes" he refuses to name, backtracking while the others continue on. Meera points out that they have never seen Coldhand's breath even in the icy weather - and he does not eat, or drink, or sleep. Bran points out that Coldhands saved Sam and Gilly from wights, so they must trust him.

Bran enters Summer in order to find an abandoned wildling village for shelter. As they rest, Jojen refuses to eat despite his weakness, telling his sister that this is not the day he dies. All four of them are near starving, but they refrain from lighting a fire at Coldhand's instruction.

Sleepless, Bran enters Summer on the hunt, who has found the corpses of five men - and the wolf pack that found them first. Summer/Bran squares off for a fight against the leader of the pack, seeing in his eyes that he is in fact a warg like him. Bran/Summer defeats the pack leader, making the pack his and giving him the choice parts of the dead men. The dead men are in black - men of the Night's Watch.

Bran awakens to a fire - Coldhands has killed a pig for them, and as the dawn is near he allows them to light a fire to roast it. Bran asks Coldhands, who fears the flames, what happened to the foes. Coldhands replies that they will not trouble him - he does not deny that they are dead at his hand. Only Jojen pays attention when Bran asks who they were - but he already knows they were men of the Night's Watch. Bran asks the ranger about his black hands, and he tells Bran that the blood runs into a man's extremities and congeals once he is dead. Meera demands to see his face, which he refuses. Bran notes that he could not pass beyond the Wall and its enchantments.

Meera asks who the three-eyed crow is and he replies "A friend. Dreamer, wizard, call him what you will. The last greenseer". Meera asks Jojen if he has dreamed this and he says they have come too far to go back now.