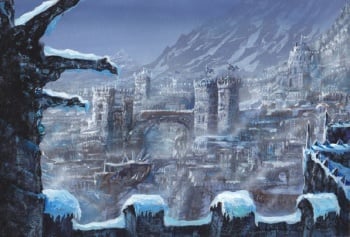 Prince of Winterfell is a title held by certain nobles in Winterfell.[1][2] 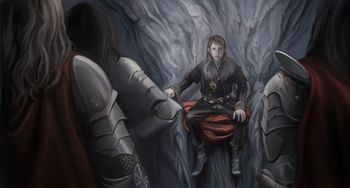 Prince Bran Stark, the heir of his elder brother Robb, is the Stark in Winterfell while Robb, the King in the North, campaigns in the south amid the War of the Five Kings.[3][4]

Theon Greyjoy takes Bran and Rickon Stark prisoner with the capture of Winterfell and sits the throne within the castle's Great Hall.[5] His sister Asha later mocks him for his inability to properly hold Winterfell, calling him Prince of Fools.[1]

Prior to the battle at Winterfell, the outnumbered Theon tells Ser Rodrik Cassel's army of northmen that all who swear fealty to his father, Balon Greyjoy, as their king and to Theon as Prince of Winterfell will be confirmed in their rights. However, Theon is captured by Ramsay Snow during the sack of Winterfell.[6]

After noticing other people at Queenscrown, Bran tells himself not to be afraid, as he was the Prince of Winterfell.[2] 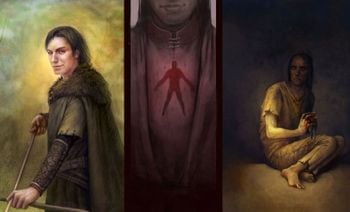 Having been tortured by House Bolton and the now-legitimized Ramsay, Theon emerges from the Dreadfort as "Reek". While Theon had been arrogant and cocksure during his brief time as Prince of Winterfell, "Reek" is traumatized and ruined.[7]

Theon travels under a peace banner to present Ramsay Bolton's terms of rendition during the siege of Moat Cailin. Since Theon is the son of the late Balon Greyjoy, King of the Isles and the Rivers, Ramsay instructs Theon to act as a prince when speaking with the ironborn garrison guarding the three towers. However, Ramsay reminds Theon that he is still truly "Reek" at heart.[8]

Later in the godswood of Winterfell, Theon is chosen to ceremoniously present "Arya Stark" (actually Jeyne Poole) in marriage to Ramsay, since Theon was the longtime ward of Eddard Stark, Lord of Winterfell, and it is believed that Arya's trueborn brothers are dead. Ramsay mocks Theon as Prince of Winterfell before his bedding with Jeyne,[9] and a guard later mocks Theon as the Prince of Stink.[10]


Cley: Why not? Everyone else is a king or prince these days.[4]
—Cley Cerwyn and Bran Stark

I will be as good a lord to you as Eddard Stark ever was. Betray me, though, and you'll wish you hadn't.[5]

—Theon Greyjoy to the people of Winterfell

I took this castle and I mean to hold it, to live or die as Prince of Winterfell.[6]

—Theon Greyjoy to the ironborn

There will be no flaying here whilst I am Prince of Winterfell, Theon had responded, little dreaming how short his rule would prove.[9]

His reign as prince of Winterfell had been a brief one. He had played his part in the mummer's show, giving the feigned Arya to be wed, and now he was of no further use to Roose Bolton.[11]