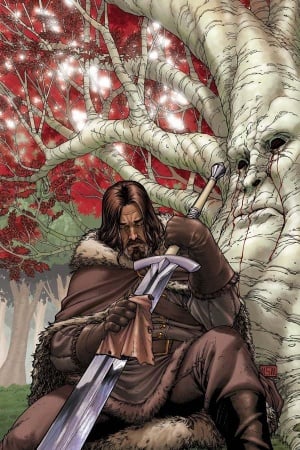 The godswood's multitude of trees create a dense canopy over old, packed earth and humus and moss. Common trees includes ash, chestnut, elm, hawthorn, ironwood, oak, sentinel, and soldier pine.[1][2][3] At the center of the grove stands an ancient weirwood with a face carved into it, a heart tree standing over a pool of black water.[1]

Across the godswood from the heart tree, beneath the windows of the Guest House, an underground hot spring feeds three small pools, with a moss-covered wall looming above them. The godswood is enclosed by walls, and is accessed by a main iron gate, or smaller wooden ones. Snow shrikes can be seen when the godswood is covered in snow.[4]

Winterfell's godswood may date back ten thousand years.[1] According to legend, Brandon the Builder built the castle around the grove[1] and prayed in the ancient godswood, which is warmed by hot springs.[5]

Eddard Stark, Lord of Winterfell, always visits the godswood after taking a man's life.[1] Eddard once ordered one of his sons, Bran Stark, to cleanse himself in the godswood after climbing Winterfell's walls without permission.[8] Theon Greyjoy, a ward of Eddard, often recuperates in the hot springs after sparring with Robb Stark and Jory Cassel. Theon also had some of his first romantic experiences in the grove.[3]

Following the execution of the deserter Gared, Lady Catelyn Stark finds her husband, Lord Eddard Stark, cleaning Ice in the godswood. Catelyn, a southron, is unnerved by Winterfell's forest.[1]

Ser Rodrik Cassel confines the direwolves Summer and Shaggydog to the godswood after the latter bites Little Walder Frey. The children later play lord of the crossing at one of the pools.[10]

Sansa Stark, hiding at the Eyrie, uses twigs and fallen branches to represent the godswood while making a snow castle of Winterfell.[15]

After the battle beneath the Wall, Stannis Baratheon offers to name Jon Snow as Lord of Winterfell.[16] Jon declines, however, as Melisandre would require him to burn the godswood's heart tree.[17] 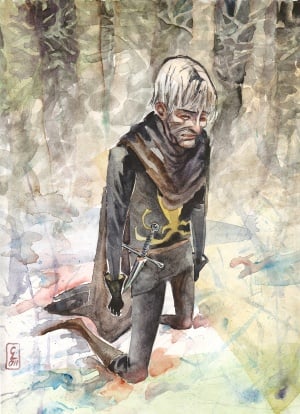 The three-eyed crow trains Bran in a cave found beyond the Wall. Looking through the eyes of the heart tree, Bran has a series of visions of events which occurred in the godswood.[18]

In the aftermath of the Red Wedding and Roose Bolton being named Warden of the North, his son Ramsay weds "Arya Stark" (actually Jeyne Poole) in Winterfell's godswood. The hot springs prevent the ground from freezing.[3]

Theon Greyjoy, Ramsay's prisoner, is allowed to wander the castle. He frequently visits the godswood and observes it is often full of praying northmen during daylight.[19] During one visit Theon thinks he hears the weirwood's leaves whisper his name as well as that of Bran.[19]

It was a dark, primal place, three acres of old forest untouched for ten thousand years as the gloomy castle rose around it. It smelled of moist earth and decay.[1]

He remembered their godswood; the tall sentinels armored in their grey-green needles, the great oaks, the hawthorn and ash and soldier pines, and at the center the heart tree standing like some pale giant frozen in time. He could almost smell the place, earthy and brooding, the smell of centuries, and he remembered how dark the wood had been even by day. That wood was Winterfell. It was the north. I never felt so out of place as I did when I walked there, so much an unwelcome intruder. He wondered if the Greyjoys would feel it too. The castle might well be theirs, but never that godswood. Not in a year, or ten, or fifty.[2]

The red leaves of the weirwood were a blaze of flame among the green. Ned Stark's tree, he thought, and Stark's wood, Stark's castle, Stark's gods. This is their place, not mine.[20]

Theon found himself wondering if he should say a prayer. Will the old gods hear me if I do? They were not his gods, had never been his gods. He was ironborn, a son of Pyke, his god was the Drowned God of the islands ... but Winterfell was long leagues from the sea. It had been a lifetime since any god had heard him. He did not know who he was, or what he was, why he was still alive, why he had ever been born.[3]

And for one strange moment it seemed as if it were Bran's face carved into the pale trunk of the weirwood, staring down at him with eyes red and wise and sad. Bran's ghost, he thought, but that was madness.[19]