From A Wiki of Ice and Fire
(Redirected from Crypts of Winterfell)
Jump to: navigation, search 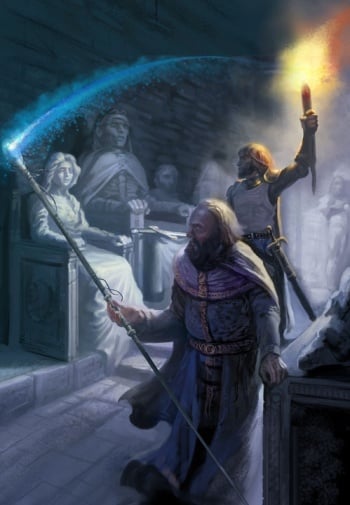 The crypt of Winterfell[1] (also crypts beneath Winterfell[2]) is located below Winterfell and contains the tombs of the members of House Stark.[3]

The crypt's ironwood door, which is located in the oldest section of Winterfell near the First Keep[4] and the lichyard,[5] is old and heavy.[6] The chilly and dark crypt is accessible by narrow and winding spiral stone steps which lead to multiple levels. One floor contains a long line of granite pillars, two by two, between which are entombed the dead of House Stark. It has a vaulted ceiling.[1]

While all family members can have tombs in the crypts,[7][6] statues are traditionally only made for Kings in the North and Lords of Winterfell.[8] The likenesses of these high lords are carved into the stone, some shaggy, some clean shaven.[8] Large stone direwolves curl at their feet. According to tradition, iron longswords across each lord's lap keep vengeful spirits within the crypt.[1]

The cavernous vault is larger than Winterfell itself, with older Starks buried in deeper and darker levels.[8] The lowest level is said to be partly collapsed.[4] The most recent tombs within the crypts are those of Lord Rickard Stark and his children, Brandon and Lyanna. The tombs further back, empty and unsealed, are saved for future members of House Stark.[1]

Breaking the tradition of only lords having statues, Lord Eddard Stark, Rickard's successor, had statues made of his deceased siblings, Brandon and Lyanna, after Robert's Rebellion.[8] There is also a statue for Artos the Implacable, the younger brother of Lord Willam Stark.[9]

According to free folk legend, Bael the Bard disappeared from Winterfell with the daughter of Lord Brandon Stark. The daughter eventually reappeared with an infant, a future Lord Stark, with the legend claiming that they had hid within the crypt.[10]

The Testimony of Mushroom alleges that when Prince Jacaerys Velaryon came to Winterfell at the start of the Dance of the Dragons, Vermax laid dragon eggs in the depths of the crypts, where hot springs are near the walls. Archmaester Gyldayn rejects the idea.[11]

Arya Stark was a little girl when she saw the crypts for the first time; Old Nan had told her it contained spiders and rats the size of dogs. On that occasion, Jon Snow, having covered himself with flour, tried to scare Arya and her siblings as a ghost.[7] Bran Stark played in the vault with Jon, Robb Stark, and his sisters, Arya and Sansa.[8] Arya also sometimes hid in the crypts and would play come-into-my-castle and monsters and maidens amongst the stone kings.[12] Rickon Stark and Shaggydog in the crypts of Winterfell. - Illustrated by Chris Casciano. © Fantasy Flight Games.

Shortly after arriving at Winterfell, King Robert I Baratheon visits the crypt with Lord Eddard Stark to pay his respects.[1] Ned notices that the oldest longswords have rusted away to nothing. They visit the large tomb of Ned's father, Lord Rickard Stark, and the flanking tombs of Ned's siblings, Brandon and Lyanna Stark.

At Castle Black, Jon Snow tells Samwell Tarly that he sometimes dreams of the crypts. He is afraid of what he will find within them and awakens when they become too dark.[13]

While in King's Landing, Ned dreams of the crypts beneath Winterfell, envisioning the Kings of Winter watching him with eyes of ice and the stone direwolves snarling at him. Lyanna's statue whispers to him, "Promise me, Ned."[2]

The crippled Bran Stark dreams of visiting the crypts with the three-eyed crow and speaking with his father, Eddard, who is away in the capital. After waking he tasks Hodor with bringing him the crypts, but the stableboy is terrified and refuses to enter the crypts, which had not happened before.[8][14]

To prove that Ned is not there, Maester Luwin brings Bran to the crypts with the assistance of Osha instead of Hodor. Bran identifies the statues of Kings Jon, Rickard, Theon the Hungry Wolf, Brandon the Shipwright, Brandon the Burner, Rodrik, and Torrhen Stark, as well as Lords Cregan and Rickard and Rickard's children, Brandon and Lyanna. Rickon Stark, having hidden in Ned's empty tomb, claims he also had a vision of Ned the previous night. Later in Luwin's turret, they receive a raven informing them of Ned's death in King's Landing.[8]

A stonemason chisels the likeness of Eddard for his granite tomb in the crypt. Rickon shows the vaults to Big Walder and Little Walder Frey, which angers Bran.[15] Jojen Reed tells Bran he had a green dream of Bran and Rickon in the crypts.[16]

Ser Cleos Frey brings the bones of Ned to his widow, Catelyn Stark, to Riverrun. Catelyn tasks Hallis Mollen with bringing them to Winterfell to be entombed.[17]

Having captured Winterfell, Theon Greyjoy refuses to allow Luwin to bury the bodies of Bran and Rickon in the crypts. Unbeknownst to the servants of Winterfell, however, the bodies are the sons of a miller, not the missing Starks.[3]

Bran and Rickon, Meera and Jojen Reed, Hodor, and Osha survive the sack of Winterfell by having already been hiding within the crypts, Hodor no longer being terrified.[14] Osha wields the sword which Mikken had made for Eddard's tomb, while Meera takes Lord Rickard's sword and Bran takes that of his namesake, his uncle Brandon. Once Osha lights a torch, Bran sees the tombs of Lyanna and Brandon, as well as those of Lord Rickard; Lord Edwyle; Lord Willam and his brother Artos the Implacable; Lords Donnor, Beron, and Rodwell; one-eyed Lord Jonnel; Lord Barth; Lord Brandon; and Lord Cregan Stark.[6] As they leave they pass the tombs of King Torrhen, the King Who Knelt; Edwyn the Spring King; Theon, the Hungry Wolf; Brandon the Burner and Brandon the Shipwright; Jorah and Jonos; Brandon the Bad; Walton the Moon King; Edderion the Bridegroom; Eyron; Benjen the Sweet and Benjen the Bitter, and Edric Snowbeard. Hodor is able to move the ironwood door blocking their exit.[6]

En route to the Wall, Bran recalls that in addition to the swords taken by himself and Meera, Hodor took a much older rusted iron sword.[18]

Jon Snow dreams he is walking past the stone kings, who tell him there is no place for him in the crypt.[19]

When the kindly man asks Arya Stark of what she thinks when she smells candles at the House of Black and White, one memory is of the crypts with their stone kings.[20]

When Bran has a number of visions within the cave of the three-eyed crow, one of them is of men he recognizes from their statues.[21]

Lady Barbrey Dustin has Theon show her the entrance to the crypts, and they descend into the dark. Theon sees the statues of Edric Snowbeard, Brandon the Shipwright, Theon Stark, and Beron Stark. They notice one statue missing a rusted sword, as well as swords missing from those of Lord Rickard Stark and Brandon Stark. Barbrey confides to Theon her relationship with Brandon in her youth. She wants to prevent Ned Stark's bones from reaching Winterfell because he did not bring Willam Dustin's remains back to Barrowton after Robert's Rebellion.[4]

Holly asks Theon to show her the crypts, but he refuses to help her or Abel.[22]

Take me down to your crypt, Eddard. I would pay my respects.[1]

Robert: Ah, damn it, Ned, did you have to bury her in a place like this? She deserves more than darkness...


Eddard: She was a Stark of Winterfell. This is her place.
Robert: She should be on a hill somewhere, under a fruit tree, with the sun and clouds above her and the rain to wash her clean.


Eddard: I was with her when she died. She wanted to come home, to rest beside Brandon and Father.[1]
—Robert I Baratheon and Eddard Stark regarding Lyanna Stark

Somehow I know I have to go down there, but I don't want to. I'm afraid of what might be waiting for me.[13]}

This was where they came when the warmth had seeped out of their bodies; this was the dark hall of the dead, where the living feared to tread.[6]

Their faces were stern and strong, and some of them had done terrible things, but they were Starks every one, and Bran knew all their tales. He had never feared the crypts; they were part of his home and who he was, and he had always known that one day he would lie here too.[6]

All my dreams are of the crypts, of the stone kings on their thrones. Sometimes I hear Robb's voice, and my father's, as if they were at a feast. But there's a wall between us, and I know that no place has been set for me.[23]

Theon: What do you want?
Holly: To see these crypts. Where are they, m'lord? Would you show me? Deep and dark, they say. A good place for touching. All the dead kings watching.[22]