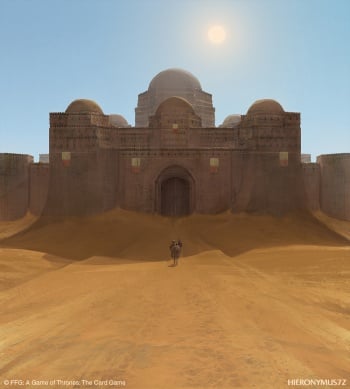 House Uller of Hellholt is one of the great noble houses in Dorne. Their keep, the Hellholt, is in the middle of the Dornish desert, and they are reputed to be impulsive and unpredictable. A Dornish saying is "Half of the Ullers are half-mad, and the other half are worse."[3]

Their arms are rayonne yellow over crimson.[4][5] The motto of the house does not appear in the books.

The Ullers were Andal adventurers who settled along the Brimstone.[2] The Hellholt is named after an event in which rivals were invited to the castle, locked within, and burned to death.[6] This action inspired the Uller's arms.[7]

The Ullers supported House Nymeros Martell against House Yronwood during Nymeria's War. After the death of her first husband, Nymeria was married to Lord Uller and then to Ser Davos Dayne, her final husband.[8]

At the start of the First Dornish War, Lord Harlen Tyrell's army found the Ullers had fled the Hellholt rather than give battle. When the Dornishmen rebelled later in the war, Harlen and his garrison disappeared in the sands after leaving the Hellholt to retake Vaith and Sunspear. Qheen Rhaenys Targaryen and Meraxes were both lost at the Hellholt in 10 AC. The queen's body was never recovered by the Targaryens, however, and some said she was tortured by the Ullers.[9] During the Dragon's Wroth, four consecutive Lords of the Hellholt were murdered for the Iron Throne's ransom on their heads.[10]

Lord Harmen Uller, his brother Ser Ulwyck Uller, and his natural daughter Ellaria Sand are among the Dornish lords that accompany Prince Oberyn Martell to King's Landing.[4] Ellaria is the paramour of Oberyn.[4][11]

Arianne Martell plans to crown Myrcella Baratheon at the Hellholt when conceiving her conspiracy, trusting the Ullers to join her cause due to their relation with Oberyn, the Red Viper.[11]

While locked in the tower of Sunspear after the collapse of her conspiracy, Arianne ponders trying to ask for help from the Ullers, but rules it out as being too dangerous.[3]

The Ullers are present at the feast when Ser Balon Swann arrives in Sunspear to deliver the head of Ser Gregor Clegane. They did not drink when Ricasso raises a toast to King Tommen Baratheon.[12]

House Uller at the end of the third century

The known Ullers during the timespan of the events described in A Song of Ice and Fire are: