Harmen Uller is the Lord of Hellholt and head of House Uller. 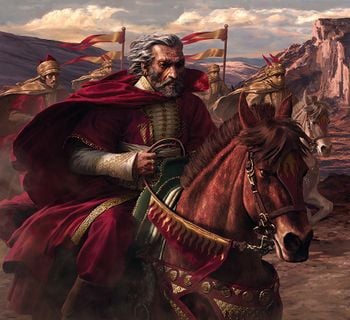 Harmen and his brother Ulwyck are among nobles who accompany Prince Oberyn Martell to King's Landing for the wedding of King Joffrey I Baratheon to Lady Margaery Tyrell.[3]

Princess Arianne Martell intends to crown Princess Myrcella Baratheon as the Queen of the Seven Kingdoms at Harmen's castle, Hellholt, but her plan fails when her group is intercepted by her father's guards.[4] While she is a captive, Arianne considers contacting Lord Harmen for aid, considering him strong enough to challenge her father. However, she is worried that doing so might cause even more bloodshed, something which she wants to avoid and thus eventually decides against involving Harmen further.[5]

Harmen, his brother Ulwyck, and his bastard daughter Ellaria Sand are present at the feast held at Sunspear for the arrival of Ser Balon Swann with the skull of Ser Gregor Clegane. Both Harmen and his brother refuse to drink when Ricasso raises a toast to King Tommen I Baratheon.[6]

Harmen has a bastard daughter, Ellaria Sand, the paramour of Prince Oberyn Martell. This makes him the grandfather of the four youngest Sand Snakes: Elia, Obella, Dorea and Loreza. He has a younger brother, Ser Ulwyck Uller.[2]