Battle in the Whispering Wood

From A Wiki of Ice and Fire
(Redirected from Battle of the Whispering Wood)
Jump to: navigation, search

The battle in the Whispering Wood,[6] often simply called the Whispering Wood after its forested setting,[3] is a pivotal battle during the War of the Five Kings. The Stark victory and ensuing Battle of the Camps shatters one of the Lannister armies in the riverlands, allowing Riverrun to be relieved.[1]

Ser Jaime Lannister smashes the river lords' forces at the Golden Tooth and Riverrun, capturing the heir to the riverlands, Ser Edmure Tully, and many of his knights.[7] Jaime besieges Riverrun,[7] the capital of the riverlands, while the host of his father, Lord Tywin Lannister, closes the kingsroad to the east[8] and methodically captures the castles of river lords.[7]

Unbeknownst to Jaime, Robb Stark has forged an alliance with Walder Frey, Lord of the Crossing, securing passage over the Green Fork of the Trident.[9] Joined by additional soldiers from House Frey of the Twins and House Mallister of Seagard, Robb moves on Riverrun from the north in an attempt to outflank the unsuspecting Lannister forces and relieve the besieged forces at Riverrun. Robb manages to keep his march secret, thanks to the efforts of his great uncle, Ser Brynden Tully, and three hundred picked outriders, who shoot down Lannister ravens and slay Jaime's scouts.[1] Ser Marq Piper separately harries the Lannister supply trains with half a hundred men.[10] Jaime leaves his camp at Riverrun three times to deal with raiders or stubborn holdfasts.[1]

Robb sends Brynden with a few hundred men carrying Tully banners to raid and draw Jaime from his camp at Riverrun. Expecting to crush a small force, Jaime and most of his cavalry are lured north of the Tumblestone to a forested valley where the rest of Robb's men are hidden.[1] Lady Maege Mormont and Lord Jason Mallister wait east of the valley, while Lord Rickard Karstark is to the north. West is Ser Stevron Frey, and across a far ridge Lord Greatjon Umber. Robb's mother, Lady Catelyn Stark, waits high on a ridge under the protection of thirty guards led by Hallis Mollen.[1]

Once all of Jaime's unsuspecting men have entered the valley, Catelyn hears the sound of snow shrikes, possibly alerts by the waiting northmen. The Mormonts sound horns to signal the moonlit trap has been sprung, followed by Umbers, Mallisters, Freys, and Karstarks. Jaime's horsemen are attacked by bowmen hidden in the trees by Robb, and the Young Wolf and northern bannermen lead their own cavalry against the ambushed westermen. Robb is joined in the fighting by his direwolf, Grey Wind.[1] Theon Greyjoy, Robb's friend, kills men in the battle.[11]

When Jaime sees the battle is lost, he rallies his retainers and attempts to cut his way through the host to slay Robb in single combat. He is halted, but not before slaying Daryn Hornwood, Eddard Karstark, and Torrhen Karstark of Robb's personal guard.[1] Grey Wind howls as dawn breaks and the fighting winds down.[1] 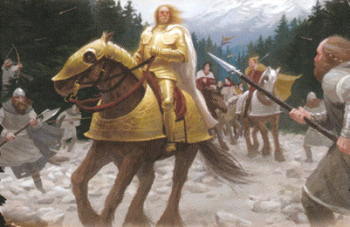 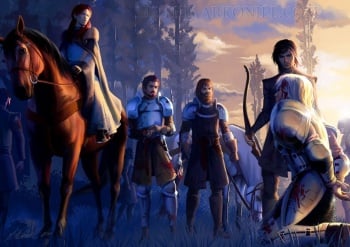 Catelyn, Robb, the Greatjon, and Jaime after the Whispering Wood, by Mathia Arkoniel©

According to Theon, the Lannisters lose ten men for every one of Robb's who fall.[1] Jaime is captured, along with near a hundred knights and a dozen lords bannermen including Lord Gawen Westerling, Lord Quenten Banefort, Ser Garth Greenfield, Lord Regenard Estren, Ser Tytos Brax, Mallor the Dornishman, Willem Lannister, and the Lannister cousins Cleos Frey and Tion Frey.[1]

The capture of Jaime leaves the Lannister army surrounding Riverrun leaderless, leading directly to its disintegration at the Battle of the Camps and leaving Lord Tywin Lannister and Queen Regent Cersei Lannister despondent.[10][12] Rumors reach Casterly Rock that Grey Wind tore out Jaime's throat in the battle.[13]

Having Jaime as a hostage, and recognizing his value as a prisoner, the Starks gain enormous bargaining power. The deaths of Eddard and Torrhen Karstark by Jaime's hand plant a seed of vengeance in the heart of their father, Lord Rickard Karstark, however.[10][14] Gawen is taken to Seagard, Quenten to Stone Hedge, Garth to Raventree Hall, and Regenard and Tytos to the Twins. Willem, Cleos, and Tion are held hostage at Riverrun.[15]

My lady, the realm has not seen such a victory since the Field of Fire. I vow, the Lannisters lost ten men for every one of ours that fell.[1]

Your brother defeated my uncle Jaime. My mother says it was treachery and deceit. She wept when she heard.[16]

How could it happen? Ser Jaime taken, the siege broken ... this is a catastrophe![10]

Some tried to flee, but we'd pinched the valley shut at both ends, and we rode out of the darkness with sword and lance. The Lannisters must have thought the Others themselves were on them when that wolf of Robb's got in among them. I saw him tear one man’s arm from his shoulder, and their horses went mad at the scent of him. I couldn't tell you how many men were thrown...[14]

Robb Stark took me unawares in the Whispering Wood. That will never happen again.[17]