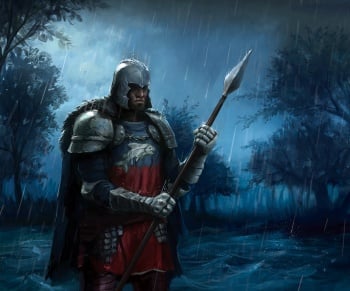 House Tully guards are guardsmen in the service of House Tully of Riverrun. They wear helms with fish crests.[1]

When Robb Stark and his mother Catelyn arrive at Riverrun after the Battle of the Camps, they are greeted by Cat's brother, Ser Edmure Tully, and Lord Tytos Blackwood. One of Edmure's guards splashes into the water when Grey Wind bounds from the boat.[1]

Ser Robin Ryger, captain of the Tully guard, announces the prisoner Ser Cleos Frey in Riverrun's Great Hall. Robb, the new King in the North, sends Cleos to King's Landing as an envoy.[2]

When Cleos returns to Riverrun with the Iron Throne's counteroffer, his escort of red cloaks includes four men—a mummer, a murderer, a poisoner, and a thief—tasked by Tyrion Lannister to rescue his brother, Ser Jaime, from Tully captivity when Edmure is away.[3] The murderer kills two guards while the thief opens Jaime's cell. The mummer impersonates Edmure's voice to make their escape from Riverrun, but Long Lew prevents the River Gate from opening when he sees Edmure returning to the castle. The Tullys hang the false envoys and some red cloaks who came to their aid, and Jaime and the rest of the Lannister guards are imprisoned.[4]

While the Battle of the Fords is being fought, Riverrun is left with a garrison of green boys.[5]

Catelyn frees Jaime from the dungeon and sends him with Cleos to King's Landing to be exchanged for her daughters, Sansa and Arya. Ser Desmond Grell, the castellan while Edmure is in the field, sends Robin to recapture Jaime.[6] Jaime's escort, Brienne of Tarth, sinks Robin's galley, however, halting the pursuit.[7]

The guards Delp and Elwood are killed by Lord Rickard Karstark's men when Rickard has the captives Tion Frey and Willem Lannister murdered.[8] Long Lew is ready to execute Rickard the next morning, but Robb chooses to behead Lord Karstark himself.[8]

Robb names Ser Brynden Tully the castellan of Riverrun[9] and Warden of the Southern Marches[10] when he and Edmure depart for the Twins. Robb and Catelyn are then killed and Edmure is captured in the Red Wedding.[11][12]

During the siege of Riverrun by forces sworn to King Tommen I Baratheon, Jaime explains that the garrison will be allowed to take the black if Edmure yields the castle.[13] Although Edmure negotiates the castle's surrender, Brynden the Blackfish escapes in the night. Jaime allows the garrison to safely depart after they relinquish their weapons and armor. Robin chooses to take the black along with Desmond, however.[14]