The bodies of two men that accompanied Benjen Stark are found. Ser Jaremy Rykker blames wildlings, but Sam points out odd characteristics about the bodies. Back at Castle Black, Jon learns that King Robert is dead and that his father is charged with treason. At dinner that night, Ser Alliser Thorne mocks Jon and his father, and Jon attacks him. That night Jon finds the wight of one of the dead men in the Lord Commander’s room. Jon kills the monster, saving the Lord Commander.

With the hounds being useless, Ghost has led the party to the bodies of two rangers. The area makes both the hounds and the horses nervous and even Jon feels uncomfortable. Ser Jaremy Rykker identifies the bodies as Othor and Jafer Flowers, two of Benjen Stark’s men. It was Jafer’s right hand that Ghost brought to Jon in the weirwood grove. The corpse’s remaining hand is as black as the cloak he wears. Both of the corpses have the same pale skin, black hands, and staring blue eyes.

Remarking that they are only two of the six men that Benjen took with him, Lord Commander Mormont asks Ser Jaremy how two men could die so close to the Wall without the rangers knowing; Othor even wears a hunting horn. Ser Jaremy insists that no horn was blown or it would have been heard. He goes on to complain that he does not have sufficient men to patrol and mentions the Lord Commander’s own order to stay close to the Wall following Benjen’s disappearance.

Mormont asks how the men died. A quick examination shows that Jafer was killed by an axe blow to the neck and that Othor is riddled with wounds. The old forester Dywen suggests that Othor was known to carry an axe. Ser Jaremy points out that wildlings carry axes as well, suggesting it to be the work of Mance Rayder, which Mormont finds questionable so close to the Wall. Ser Jaremy asks who else it could have been. Jon knows the answer, they all do, but the Others have been gone for 8,000 years if they ever existed at all.

Mormont declares that if Benjen had been attacked so close to Castle Black, he would have returned for more men before going after the attackers. Ser Jaremy suggests that, sometime in the six months that Benjen has been gone, his party might have been attacked by wildlings and that Othor and Jafer were only the last survivors. To support this claim, the knight points out that the two bodies cannot have been dead for more than a day.

Sam now speaks up. The fat boy is present to be the eyes of blind old Maester Aemon, but Jon had to force the cowardly boy to even look at the bodies. Now Sam insists that Ser Jaremy is wrong about the bodies. At the Lord Commander’s urging, Sam points out that the blood in the corpses’ veins is dry and crusty, as if they have been dead for a long time. However, the bodies do not stink and have not begun to decompose; they are also untouched by maggots or scavengers. Suspicious of the untouched nature of the corpses, Mormont orders Chett to bring one of the hounds closer, but no matter how hard he tries, the hound fights to stay away from the bodies. In addition, Sam points out that there are no pools of blood to indicate the men were killed there, indicating that the bodies have been moved. The old forester Dywen and Ser Jaremy also note that they do not recall either Othor or Jafer having blue eyes.

Several of the other rangers urge that the bodies should be burned, but the Lord Commander wants Maester Aemon to examine them further. It proves impossible to tie the bodies to the horses, who panic at their proximity to the corpses, so they are carried back on crude slings.

As they ride back, Jon follows the Lord Commander and finds that it is too warm, with the Wall weeping copiously. This weather is called by the old men “Sprit Summer,” when the season is giving up its ghosts. This means that winter is coming, and a long summer means a long winter. Jon now thinks back to the stories that Old Nan told of the Others coming riding in the dark and everything, including cities, falling before them and how they feed their servants on the flesh of human children.

When they finally see the Wall, Lord Commander Mormont calls for Sam and compliments him, telling him that he is fat but not stupid.

When they arrive at the gate, the Lord Commander is told by Bowen Marsh, the Lord Steward, that there has been a raven. Mormont orders the bodies put in a storage room. Meanwhile, Jon notices everyone is looking at him and knows something is wrong. Jon searches out his friends and Pyp tells him that King Robert is dead. Jon wonders if his father will now return to Winterfell and decides that when he visits he will ask for the truth about his mother. His friends ask about the bodies, but Jon only says they were queer.

As he walks to the Lord Commander’s Tower Jon notices the stares again, and when he arrives he is told that Mormont wants to see him. When he enters, Mormont surprises him with an offer of wine and asks him to sit. Jon states that it is grievous news about his father and the king which Mormont confirms. The Lord Commander tells Jon that it is said that the king loved to hunt and that the things we love destroy us every time. He then states that if it had not been for the love a woman, his son Jorah would not have thought to sell poachers into slavery. Jon does not understand, but the Lord Commander gives no answer, only a repeated order to sit and drink.

Jon is told that his father has been imprisoned as a traitor for plotting with Robert’s brothers to deny the throne to Prince Joffrey. Jon denies that his father could ever be a traitor, but then recalls that he fathered a bastard; where was the honor in that? The Lord Commander explains that he plans to use his contacts in King's Landing to ensure that Eddard is allowed to take the black; they could use men of Eddard’s ability on the Wall. Jon thinks that it would be a terrible injustice to strip his father of Winterfell but knows it would be preferable to death. Then he remembers Joffrey mocking Robb Stark and Ser Rodrik Cassel, and asks if the king will listen. Mormont replies that Joffrey may listen to his mother, though it is too bad Tyrion Lannister is not there. Mormont declares it a bad thing that Jon’s “mother” took Tyrion captive, but Jon haughtily reminds him that Catelyn Stark is not his mother. Jon then asks about his sisters and Mormont promises to ask about them. Then Mormont states that he hopes Jon is not going to do anything stupid; his duty is now here and his old life ended when he took the black. He then dismisses Jon, telling him that he can help write the letter the next day. 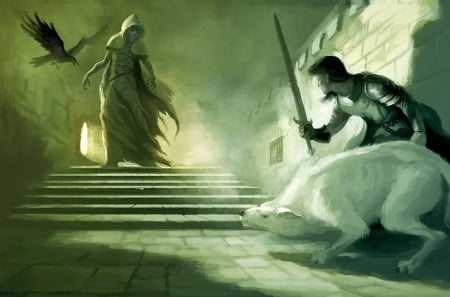 Jon Snow, Ghost and Mormont's raven confront the wight that was once Othor - by Thomas Denmark. © Fantasy Flight Games

Despite Mormont’s words, Jon remains convinced the Starks are his family and wonders how it cannot be his concern. He also wonders whether his father could truly be a traitor. At the evening meal Jon realizes that everyone knows about his father’s arrest. When his friends rally to him and assure him that they do not believe the stories, Jon realizes that they are now his brothers as much as Robb and Bran and Rickon. Then Jon hears Ser Alliser mocking both Jon and his father. In the blink of an eye, Jon jumps over the table and attacks Ser Alliser with a knife, but his friends hold him back and he is marched to his sleeping cell. Later, Mormont visits him and reminds Jon that he told him not to do anything stupid. Now the high officers must meet to decide his fate. A guard is left at his door, and his friends are not permitted to visit him, though Ghost is allowed to stay.

That night, Jon wakes to Ghost scratching at the door, and it is very cold. When he opens his door, Jon finds his door guard dead and he hears noises coming from the Lord Commander’s chamber. Taking the dead guard’s sword, Jon ascends to the Lord Commander's chamber where he finds the door open and Mormont's raven squawking. He sees the shadow of a man in black with icy blue eyes going into the Lord Commander’s sleeping chamber.

Ghost attacks the man, and Jon pulls down the curtains so that he can see. The man has his black hands around Ghost’s throat. Jon cuts off an arm with his sword and Ghost is able to wrench free. The next stroke cuts halfway through the man’s face, and now Jon recognizes Othor. The severed hand claws at his calf and Jon pulls it off. Ghost attacks the hand while Jon strikes the undead man in the neck, but Othor slams into him, knocking him down. In the fall, Jon loses his sword. Othor is on top of Jon and attempting to choke him, but is finally pulled off by Ghost. As he regains his feet, Jon spots the Lord Commander standing naked in the doorway with an oil lamp as the hand approaches him. Jon grabs the oil lamp from the Lord Commander and throws it on the drapes, setting them afire. Then Jon grabs the burning drapes and throws them onto Othor, praying that the wight will burn.