Grenn is a recruit of the Night's Watch and friend of Jon Snow. He is given the nickname Aurochs by Ser Alliser Thorne.[2] In the television adaptation Game of Thrones he is played by Mark Stanley.

Grenn is thick of neck.[2] He is a head taller than Jon Snow, at the age of sixteen.[2]

Jon's original impression of Grenn is that he is slow and clumsy.[2] Even his friends in the Night's Watch often mock him for his looks and for not being the smartest.[3][4][5]

Grenn is one of the recruits when Jon Snow comes to join the Night's Watch. They are trained together by Ser Alliser Thorne, with Alliser deriding Grenn as "Aurochs". While training with blunted swords, Jon defeats Grenn and causes an injury to his hand. Grenn, Todder, and two other recruits confront the younger Jon, but Donal Noye prevents further violence and reminds Jon of his advantageous upbringing. After he has received news that his brother Bran has woken from his coma, Jon is conciliatory towards Grenn, offering to teach him how to defend against the move that has caused his injury.[2]

Grenn trains with Jon Snow and his sword fighting soon improves, now able to hold his own against a more adept recruit such as Halder. As a result, Pypar also asks Jon for help.[6]

Alliser picks on Samwell Tarly when he arrives at the Wall, commanding Halder, Rast, and Albett to fight the inept youth. Grenn, Jon, and Pyp defend Sam, however. Because Rast is still willing to hurt Sam for Alliser, he is visited by Grenn, Jon, and Pyp and threatened by Jon's direwolf, Ghost. Sam joins Grenn, Jon, Pyp, and Halder during meals and eventually shares in their jests.[7]

When a new group of recruits heads toward Castle Black, Alliser names eight of his novices ready to join the Night's Watch. Grenn celebrates with wine.[8] Grenn is happy to be assigned to the rangers, while Jon is assigned to the stewards.[9]

Following the arrest of Lord Eddard Stark, Jon's father, as a traitor, Grenn is among those who lend support to Jon, telling him that the accusation is a lie. He and others stop Jon from attacking Alliser with a knife when Alliser calls Jon "not only a bastard, but a traitor's bastard".[10]

Jon saves the life of Jeor Mormont, Lord Commander of the Night's Watch, when he is attacked by a wight. Out of gratitude, the Old Bear gives Jon his family sword, Longclaw, as a gift. Afterwards, Grenn joins others who ask Jon to show them the Valyrian steel sword, explaining that they knew about the present before Jon did.[3]

Grenn is among the group of friends that stop Jon from abandoning the Wall and forswearing himself following the execution of his father in King's Landing. When Jon declares he needs to be with his brother Robb, Grenn says that those of the Night's Watch are his brothers now. He goes on explaining that, while everyone is sorry about Lord Eddard's fate, Jon cannot go back once he has made the vow.[11] 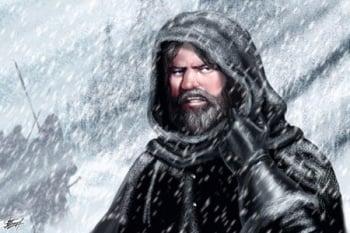 Grenn while beyond the Wall - by Amok ©

Grenn participates in the great ranging led by Lord Commander Mormont. Before it starts, Grenn joins other brothers who go to Mole's Town for drinking and whoring.[12]

During the ranging, Grenn serves as an outrider and is usually paired with Dywen. The gnarled, veteran ranger takes on a mentor role; clouting Grenn on the ear and advising the young ranger. When the group approaches Craster's Keep, Dywen tells Grenn that Craster was born of a wildling woman and a ranger. Dywen warns Jon and others to not look after Craster's wives. Grenn later challenges Dywen's boast that he slept with three of Craster's daughters during the night, explaining that he would have noticed that.[4]

Dywen declares there is a strange smell around the Fist of the First Men, explaining to Grenn that it smells cold.[13] Jon makes daggers from the stash of dragonglass he has found at the Fist, keeping one for himself and giving others to Grenn, Sam, and Lord Commander Mormont.[14][15] Grenn also takes dragonglass arrowheads from the cache.[15]

When Jon kills Qhorin Halfhand on his command to prove that he has forsaken the Night's Watch so that he can infiltrate the camp of Mance Rayder, Jon wonders whether he has lost his friends.[16]

Grenn survives the fight at the Fist, where the Night's Watch is attacked by wights. Grenn and Small Paul encourage the dispirited Samwell Tarly during the retreat south, with Grenn beginning to sing "The Bear and the Maiden Fair".[17] An Other kills Paul, but Sam manages to kill the Other with a dragonglass dagger. Afterward, Grenn calls him Sam the Slayer.[15]

Grenn is among those who make it back to Craster's Keep. When some men of the Watch mutiny, Grenn flees with others after the death of Lord Commander Jeor Mormont.[15] Once back at Castle Black, Grenn helps villagers from Mole's Town seek shelter.[18] During the battle beneath the Wall, Grenn rolls barrels of oil[19] and crushed stone[20] from the Wall to attack wildlings. Jon leaves command of the Wall to Grenn when he descends to Castle Black.[19]

Having grown a half a foot taller since having met Jon, Grenn has not cut his shaggy hair or beard since the Fist.[20]

Grenn complains that Jon has not been the same since being chosen the new Lord Commander.[21]

Grenn is seen sitting with Pyp and the rest in the common room. They invite Jon to sit with them, but he refuses.[22] The Lord Commander assigns Grenn to Eastwatch-by-the-Sea.

Grenn: Nobody likes cravens. I wish we hadn't helped him. What if they think we're craven too?


Grenn: I would not. I'd run away faster than you.[7]
—Grenn and Pypar

Samwell: You never liked Ser Alliser to call you Aurochs.
Grenn: He was saying I was big and stupid. If Pyp wanted to call me Aurochs, though, he could. Or you, or Jon. An aurochs is a fierce strong beast, so that's not so bad, and I am big, and getting bigger.[15]

Jon: Grenn, you have the Wall.


Grenn: Me?
Pypar: Him?
Grenn: But, b-but what do I do if the wildlings attack again?

Sometimes I think everyone is just pretending to be brave, and none of us really are. [15]