Quaithe, also known as Quaithe of the Shadow, is a shadowbinder from Asshai.[1] She is portrayed by Laura Pradelska in the television adaptation Game of Thrones.

Quaithe wears a dark red lacquer wooden mask.[2][3][4] Her eyes are visible behind the mask, wet and shiny.[5] She wears a long hooded robe.[4]

Quaithe is usually cryptic and quiet.[3]

Quaithe is one of the three representatives from Qarth who arrive at Vaes Tolorro with Jhogo in search of dragons, the other two being Xaro Xhoan Daxos and Pyat Pree.[2] Quaithe introduces herself, speaking in the Common Tongue.[2] The three seekers escort Daenerys Targaryen and her khalasar from the red waste to Qarth. While Xaro and Pyat offer Daenerys promises, Quaithe warns her to beware of those who would seek to control her young dragons (Drogon, Rhaegal, Viserion).[3]

When Daenerys sees a firemage creating and climbing a fiery ladder in the bazaar, Quaithe appears from the crowd and explains that the mage is not using trickery. Quaithe says the mage's skill has increased since Daenerys became the Mother of Dragons. When Quaithe touches Daenerys's wrist, Jhogo warns her away. Quaithe urges Daenerys to leave Qarth as soon as possible, warning that if Daenerys lingers she will not be permitted to leave the city at all. Daenerys notices that her wrist tingles, an effect of Quaithe's touch. Before Quaithe disappears into the crowd, Daenerys is told she must "pass beneath the shadow" and that she will find truth in Asshai.[5]

While sailing from Qarth to Slaver's Bay aboard the ship Balerion, Daenerys contemplates various potential enemies and their motives. She cannot determine whether Quaithe is an enemy or a dangerous friend.[6]

At Astapor, Daenerys awakens to find that a woman is in her cabin with her, although she appears only as a faint shadow. The figure repeats the warning about passing beneath the shadow, and Daenerys realizes that it is Quaithe. She jumps out of bed and opens the door, but there is no sign of Quaithe on Balerion, and Daenerys dismisses the appearance as a dream.[7]

When Daenerys has another vision of Quaithe in the Great Pyramid of Meereen, Quaithe states that neither experience was a dream. Daenerys learns that Quaithe is not physically there, however, having come another way without the knowledge of the queen's guards. Quaithe again cryptically warns Daenerys against trusting those who would seek her confidence and her dragons.[4]

While Daenerys is later wandering lost, starving, and alone in the Dothraki sea, she slips into a restless sleep and hears Quaithe's original instructions again. She then sees Quaithe, whose mask is made of starlight, and the stars whisper in a woman's voice, "Remember who you are, Daenerys. The dragons know. Do you?" The queen is eventually found by the khalasar of Khal Jhaqo.[8] 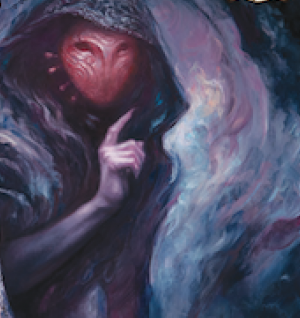 "To go forward you must go back", by Kristina Carroll © Fantasy Flight Games

They shall come day and night to see the wonder that has been born again into the world, and when they see they shall lust. For dragons are fire made flesh, and fire is power.[3]

To go north, you must journey south, to reach the west you must go east. To go forward you must go back and to touch the light you must pass beneath the shadow.[5]

Quaithe: The glass candles are burning. Soon comes the pale mare, and after her the others. Kraken and dark flame, lion and griffin, the sun's son and the mummer's dragon. Trust none of them. Remember the Undying. Beware the perfumed seneschal.


Daenerys: Reznak? Why should I fear him? If you have some warning for me, speak plainly. What do you want of me, Quaithe?


Quaithe: To show you the way.[4]
—Quaithe and Daenerys Targaryen 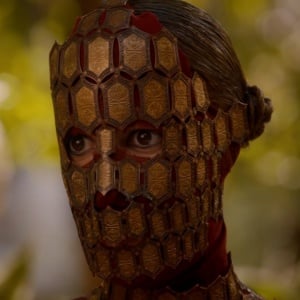 Laura Pradelska as Quaithe in Game of Thrones

Jorah: She speaks truly, my queen ... though I like her no more than the others.
Daenerys: I do not understand her.[5]

Was she an enemy too, or only a dangerous friend? Dany could not say.[6]

Khaleesi, better a man should swallow scorpions than trust in the spawn of shadows, who dare not show their face beneath the sun. It is known.[5]