Moqorro is a red priest in service to the faith of R'hllor, from the Temple of the Lord of Light in Volantis.[3]

Moqorro's skin is black as pitch,[3] darker than coal or jet.[4] He is over six feet tall, with a belly like a boulder. A tangle of pure white hair grows from his face like a mane of a lion.[3] According to Tyrion Lannister, he has yellow and orange flame tattoos inked across his cheeks and forehead.[3] According to Victarion Greyjoy, Moqorro's flame tattoos are red-and-orange.[1]

Moqorro wears scarlet robes with sleeves, collar, and hems embroidered with orange satin flames. He carries an iron staff as tall as he is, with a dragon's head that spits crackling green flame when brought down.[3][4] He speaks the Common Tongue well, with only a hint of accent.[3]

Like Melisandre, Moqorro claims to see the future in the flames, though his predictions appear to be more accurate.[citation needed] 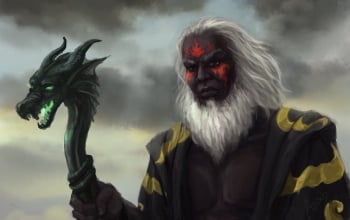 Moqorro is sent by Benerro, the High Priest, to offer guidance and help to Daenerys Targaryen.[3] He joins the crew of the ship Selaesori Qhoran heading to Qarth, although Benerro has seen in his flames that the ship will not reach Qarth.[5] When Ser Jorah Mormont learns that Moqorro wishes to see Daenerys, the knight books passage on the ship so he can take his prisoner, Tyrion Lannister, to Daenerys. However, the ship is hit by a great storm and later captured by slavers, which Moqorro had foreseen as the reason the ship would never reach Qarth. Moqorro is lost overboard during the storm.[6]

Ten days after the storm, Grief, the ship of Rodrik Sparr, discovers Moqorro clinging to wreckage in the sea. The Vole brings Moqorro to Victarion Greyjoy and the rest of the Iron Fleet near the Isle of Cedars. The ironborn want him put to death, but Moqorro is unafraid and calm, which further unnerves the crew. Moqorro tells to Victarion he knows of his quest to seek the dragon queen, and that Victarion will die from his wounded hand without Moqorro's help.[4]

Using magic, Moqorro manages to cure Victarion's wound and to aid Victarion in his quest. He has Victarion kill the ship's maester, Kerwin, to bring good winds, just as Melisandre once did when she had Stannis Baratheon burn Alester Florent to grant his fleet favorable winds to Eastwatch.[4]

Since Moqorro's red garb was ruined in the sea, Victarion has Tom Tidewood make Moqorro new robes from the black and gold of the Greyjoy sails. Victarion's crew live in great fear of Moqorro, and among them he is known as the "Black Flame". This name is given to him by Steffar Stammerer, who cannot pronounce Moqorro's name properly.[1]

Moqorro studies the glyphs on the dragon horn, and tells Victarion he must claim it with blood if he wishes to bind dragons to his will.[1]

Dragons old and young, true and false, bright and dark. And you. A small man with a big shadow, snarling in the midst of it all.[3]

The Lord of Light has shown me your worth, lord Captain. Every night in my fires I glimpse the glory that awaits you.[1]

Victarion: Why do you say this man is a wizard? I see only a ragged red priest.
Rodrik: I thought the same, lord Captain ... but he knows things. He knew that we made for Slaver's Bay before any man could tell him, and he knew you would be here, off this island.[4]