From A Wiki of Ice and Fire
(Redirected from The Hand's tourney)
Jump to: navigation, search 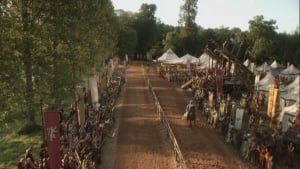 The Hand's tourney as depicted in Game of Thrones

The Hand's tourney[1][2][3] is a tourney held in King's Landing to celebrate the naming of Eddard Stark as Hand of the King to Robert I Baratheon. 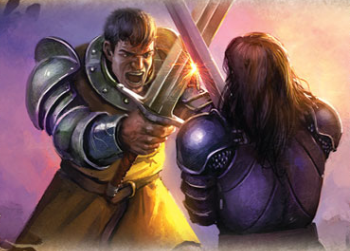 "I am no ser," the Hound replied, but he took the victory, and the champion's purse, and, for perhaps the first time in his life, the love of the commons.[6]
Art by Cristi Balanescu © Fantasy Flight Games 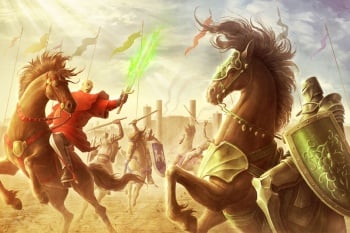 Thoros of Myr is victorious in the melee.
Art by Jason Engle © Fantasy Flight Games

Jory: The talk in the yard is we shall have a tourney, my lord. They say that knights will come from all over the realm to joust and feast in honor of your appointment as Hand of the King.
Eddard: Do they also say this is the last thing in the world I would have wished?[7]

As if the expense and trouble were not irksome enough, all and sundry insisted on salting Ned's wound by calling it "the Hand's tourney," as if he were the cause of it. And Robert honestly seemed to think he should feel honored![1]

The splendor of it all took Sansa's breath away; the shining armor, the great chargers caparisoned in silver and gold, the shouts of the crowd, the banners snapping in the wind ... and the knights themselves, the knights most of all.[2]

King Robert had staged it in her father's honor. High lords and fabled champions had come from all over the realm to compete, and the whole city had turned out to watch. She remembered the splendor of it: the field of pavilions along the river with a knight's shield hung before each door, the long rows of silken pennants waving in the wind, the gleam of sunlight on bright steel and gilded spurs. The days had rung to the sounds of trumpets and pounding hooves, and the nights had been full of feasts and song. Those had been the most magical days of her life, but they seemed a memory from another age now.[8]