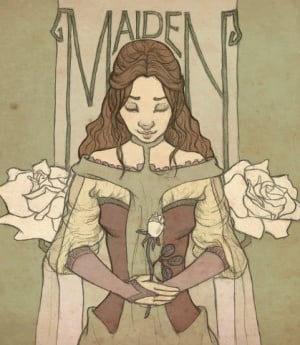 The Maiden - by mustamirri ©
Not to be confused with Maiden, a term used to refer to virgin women.

The Maiden, or the Maid, is one of the seven aspects of a single deity. Believers of the Faith of the Seven consider their god to be one with seven aspects, as the sept is a single building, with seven walls.[1]

See also: Images of the Maiden

The Maiden represents innocence and chastity. She is usually prayed to protect a maiden's virtue.

A passage in The Seven-Pointed Star says that the Maiden brought Hugor of the Hill, the King of the Andals, a bride as supple as a willow with eyes like deep blue pools.[2]

Legend says that Galladon of Morne's valor was so great the Maiden fell in love with him. She gave him an enchanted sword, the Just Maid, to demonstrate her love for him.[3]

Catelyn Stark prays in a nameless village's sept. The sept is modest and has no statues of the Seven, only rough charcoal drawings to represent them. She goes to the Maid and beseeches her to lend her courage to Arya and Sansa, to guard them in their innocence.[1]

The pious dwarf makes Brienne of Tarth's acquaintance at the Seven Swords inn. After chatting with her he notices Brienne looks sad and asks her if she is thinking of her missing sister. He pats her hand and tries to reassure her, telling her:-

The Crone will light your way to her, never fear. The Maiden will keep her safe.[4]

The Maiden dances through the sky,
she lives in every lover's sigh.
Her smiles teach the birds to fly,
and gives dreams to little children.[5]