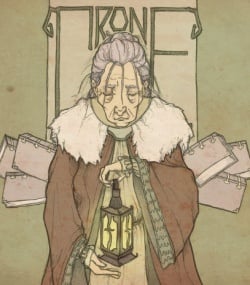 The Crone is one of the seven aspects of a single deity. Believers of the Faith of the Seven consider their god to be one with seven aspects, as the sept is a single building, with seven walls.[1]

See also: Images of the Crone

The Crone represents wisdom and is prayed to for guidance. Her statues often show her with a lamp in one hand. A passage in the Seven-Pointed Star says that the Crone foretold that the girl the Maiden brought forth would bear the king four-and-forty mighty sons.

the Crone is said to have let the first raven into the world when she peered through the door of death.[2]

There is a constellation of stars called the Crone's Lantern.[3]

Catelyn Stark prays in a nameless village’s sept. The sept is modest and has no statues of the Seven, only rough charcoal drawings to represent them. She turns to the Crone and prays.[1]

The pious dwarf makes Brienne of Tarth’s acquaintance at the Seven Swords inn common room. After chatting with her he notices Brienne looks sad and asks her if she is thinking of her missing sister, he pats her hand and tries to reassure her, telling Brienne “The Crone with light your way for her, never fear. The Maiden will keep her safe.”[4]

Guide me, wise lady. Show me the path I must walk, and do not let me stumble in the dark places that lie ahead.[1]

The Crone is very wise and old,
and sees our fates as they unfold.
She lifts her lamp of shining gold,
to lead the little children.[5]