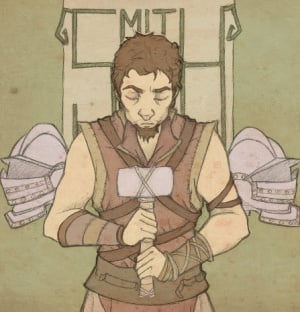 The Smith is one of the seven aspects of a single deity. Believers of the Faith of the Seven consider their god to be one with seven aspects, as the sept is a single building, with seven walls.[1]

According to Septon Meribald, the Smith can also be referred to as the Farmer, the Fisherman, the Carpenter, or the Cobbler as they all represent workers.[2]

See also: Images of the Smith

The Smith represents crafts and labour, and portrayed with a hammer.[1] He is usually prayed to when work needs to be done, for strength. The Faith believes that the Smith gave the horse to man to aid him.[3] The Seven-Pointed Star states the Smith gave iron to Hugor of the Hill, although the Rhoynar believe they instead taught ironworking to the Andals.[4]

The red wanderer is associated with the Smith.[5] A verse is devoted to the Smith in The Song of the Seven.[6]

Smith's Day is a holy day in the calendar of the Faith of the Seven.[7]

Devotees to the Smith usually wear small iron hammers around their necks to show their devotion.[8][9][10]

During King Baelor I Targaryen’s reign he had a stonemason named as the High Septon, a man that could carve stonework so beautifully that Baelor believed him to be the Smith in human form. While a fantastic stonecarver, the new High Septon could not read, write or recite any prayers.[11]

In his childhood, Ser Davos Seaworth was taught by septons to pray to the Smith for strength.[12] Though Davos did not grow up to become a devout man, he always makes offerings to the Smith before launching a new ship at sea.[13]

Melisandre burns the statues of the Seven from Dragonstone's sept, including the statue of the Smith.[13]

Catelyn Stark prays in a nameless village’s sept. The sept is modest and has no statues of the Seven, only rough charcoal drawings to represent them. She kneels before the Smith, who fixes things that are broken, and asks that he give her sweet Bran his protection.[1]

Courtiers gather in the royal sept to pray to the Seven for a positive outcome in the battle to come. Sansa Stark sees people pray at the Smith's altar, and a septon calls upon the Smith to lend strength to King Joffrey Baratheon's men.[14]

While traveling the riverlands Septon Meribald tells Podrick Payne that he has never known a boy who did not love the Warrior. He remarks that he is old though, and he loves the Smith. He expounds to Brienne and her companions,

Without his labour, what would the Warrior defend? Every town has a smith, and every castle. They make the plows we need to plant our crops, the nails we use to build our ships, iron shoes to save the hooves of our faithful horses, the bright swords of our lords. No one could doubt the value of a smith, and so we name one of the Seven in his honour, but we might as easily have called him the Farmer or the Fisherman, the Carpenter or the Cobbler. What he works at makes no matter. What matters is, he works. The Father rules, the Warrior fights, the Smith labours, and together they perform all that is rightful for a man. Just as the Smith is one aspect of the godhead, the Cobbler is one aspect of the Smith.[2]

Characters who favour the Smith

Work is a form of prayer, most pleasing to the Smith.[15]

The Smith gave men horses to help them in their labors.[3]

The Smith, he labors day and night,
to put the world of men to right.
With hammer, plow, and fire bright,
he builds for little children.[6]