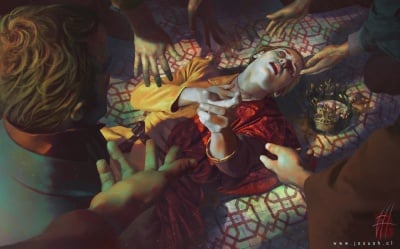 Kingslaying is the act of killing one's own king, breaking their vows of allegiance to him. In Westeros, kingslaying is condemned as an extremely vile act, especially when committed by someone sworn to protect them, as is the case with the Kingsguard.

It should not be confused with killing a king to which one has no allegiance, which is another form of regicide.

People accused, suspected or known to have committed regicide

Known or suspected victims of kingslaying

Eddard: When King’s Landing fell, Ser Jaime slew your king with a golden sword, and I wondered where you were. Gerold: Far away, or Aerys would yet sit the Iron Throne, and our false brother would burn in seven hells.[15]

—Eddard Stark and Ser Gerold Hightower right before fighting to the death.

The Kingslayer. The false knight who profaned his blade with the blood of the king he had sworn to defend.[16]

He thrust his longsword through her son's heart, and twisted.[7]

Joffrey was cruel and stupid, but I did not kill him. Have my head of if you like, I had no hand in my nephew's death.[18]

—Tyrion Lannister, during his trial