From A Wiki of Ice and Fire
(Redirected from Eastwatch)
Jump to: navigation, search

Eastwatch-by-the-Sea is the easternmost castle of the Night's Watch along the Wall, located on a grey, windswept shore by the Bay of Seals.[1] Near Eastwatch live some fisherfolk and to the west lies Greenguard.[2]

The commander of Eastwatch is Cotter Pyke, while its maester is Harmune. The Night's Watch keeps several galleys at Eastwatch, including larger vessels capable of crossing the narrow sea and lean fighting vessels. The galleys patrol the Bay of Seals in part to catch smugglers who trade weapons to the free folk.[3] Ships stationed at Eastwatch include the Talon, the Blackbird, and the Storm Crow.

Some free folk trade with the Night's Watch at Eastwatch; wildlings prefer it to Castle Black, because trading ships visit from across the narrow sea.[4] Sure-footed mules are bred by the Watch at Eastwatch.[5] 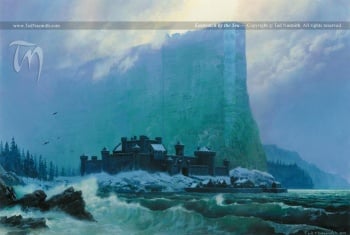 Maester Balder wrote The Edge of the World while serving at Eastwatch.[6] Maester Wyllis was last seen at the docks of Oldtown hoping to find transport to Eastwatch.[7]

The head of Ser Raymund Mallery was delivered to Eastwatch by a free folk chieftain who claimed that Raymund's rebels had been eaten.[8]

The ship carrying Aegor Rivers to Eastwatch so he could take the black was intercepted en route, allowing him to continue supporting House Blackfyre in exile.[10]

Davos Seaworth traded at Eastwatch when he was a smuggler before Robert's Rebellion. Roro Uhoris and his Cobblecat were taken by galleys from Eastwatch for the crime of trading weapons to free folk.[11]

Some Skagosi served at Eastwatch when Donal Noye joined the Night's Watch.[12] 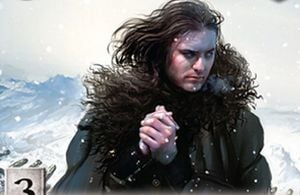 A man of the Night's Watch from Eastwatch, by Anthony Palumbo © Fantasy Flight Games

There are fewer than two hundred men stationed at Eastwatch under the command of Cotter Pyke. Tyrion Lannister and the officers of Castle Black enjoy succulent crabs shipped from Eastwatch. Jeor Mormont, Lord Commander of the Night's Watch, tells Tyrion there are reports that fisherfolk near Eastwatch have seen white walkers.[13] Bowen Marsh sends Dareon to serve with Borcas at Eastwatch.[14] Cotter writes to Jeor that large, misshapen footprints have been seen north of Eastwatch.[15]

Tyrion sends Janos Slynt and Allar Deem, to join the Night's Watch, discreetly arranging for Allar to be tossed from Summer's Dream while the carrack sails for Eastwatch.[16]

Free folk are said to be massing near Eastwatch.[12] Men from the castle escort Janos to Castle Black.[19]

King Stannis Baratheon and his forces sail to Eastwatch, then ride west with Cotter's scouts to attack Mance Rayder's host in the battle beneath the Wall.[20][21] Instead of Cotter or Ser Denys Mallister, Jon Snow is chosen as the new Lord Commander after Jeor's death.[22]

Aboard the Blackbird, Samwell Tarly and Maester Aemon sail from Eastwatch to Braavos.[23]

Lord Davos Seaworth and Salladhor Saan sail from Eastwatch for White Harbor,[24] while Queen Selyse Florent and her queen's men travel from Eastwatch to Castle Black.[25] Lord Commander Snow sends his friends Grenn and Pypar from Castle Black to Eastwatch.[26] When Melisandre has a vision of submerged towers by the sea, Jon ponders if it is Eastwatch.[27]

In order to save thousands of wildlings trapped at Hardhome, Cotter leads eleven ships in a rescue mission, with Ser Glendon Hewett remaining to hold Eastwatch.[28] Bowen Marsh is tasked with collecting the treasures of wildlings crossing the Wall south and having the tolls sent to Eastwatch. Because their mammoths are too big to travel through the Wall at Castle Black, the giants are sent east to round the Wall at Eastwatch.[29] 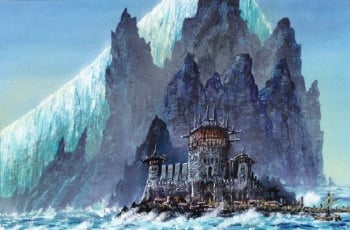 Davos had traded at Eastwatch in his smuggling days. The black brothers made hard enemies but good customers, for a ship with the right cargo.[11]

Eastwatch was a better place to trade than Castle Black; that was where the ships came, laden with goods from the fabled lands beyond the sea.[4]

We are done with Eastwatch. We did not like it there. A queen should be mistress beneath her own roof. We found your Cotter Pyke to be an uncouth and unpleasant man, quarrelsome and niggardly.[25]