From A Wiki of Ice and Fire
(Redirected from Epilogue (A Dance with Dragons))
Jump to: navigation, search

Lord Regent Kevan Lannister is hosting a small council meeting in the Red Keep's throne room; neither Queen Margaery nor Cersei are present, nor is Tommen, as Kevan thinks it kinder to let him spend as much time as possible with his mother before her trial and possible execution. The lord of Griffin's Roost, Ronnet Connington stands before them, insisting that he is loyal to King Tommen and uninvolved with whoever claims to be his uncle Jon Connington and the Targaryen pretender he has brought with him, who have landed with the Golden Company in the Stormlands, attacking towns and villages as they march on Storm's End.[1] Ronnet begs to prove his loyalty in battle, but the new Hand of the King Mace Tyrell refuses, and orders Ronnet kept in his quarters for the moment, in addition to sending the men-at-arms Jaime sent to accompany Connington south - all former thugs of Gregor Clegane's - to the Night's Watch.

Kevan has begun to resent the demands of Mace Tyrell as Cersei did, but he realises he cannot openly oppose them; Tyrell and his bannerman Randyll Tarly have both brought armies to King's Landing, while the Lannisters' standing army is still in the Riverlands. Tyrell insists that he will deal with Connington and his boy after Margaery's trial, but both he and Tarly show much reluctance about it; Kevan however chides them. Tyrell then asks why Tommen can't declare Margaery's innocence without a trial, but Kevan insists that defying the Faith will send them straight into the arms of Connington or Stannis Baratheon at a time when the Ironborn are attacking the Western lands as well. Mace Tyrell retorts that Paxter Redwyne will drive the Ironmen back and that Stannis has to face both Roose Bolton and the cold climate of the North. He also dismisses the threat Jon Connington and the exiles of the Golden Company pose but Kevan is unsure; he still remembers when Aerys appointed Connington to the role of Hand, and while Tywin Lannister's assessment of Connington as unsuitable for the post proved true after his failure to kill Robert Baratheon at the Battle of the Bells, Kevan believes age has surely made Connington wiser, more cautious and more dangerous.

The small council all agree that Connington and his pretender must be crushed, lest Daenerys Targaryen receive word and leave Meereen to join forces with them. Pycelle suggests that they buy off the Golden Company, but new Master of Coin Harys Swyft dismisses this idea; thanks to Cersei's economic mismanagement, the treasury is nearly empty, the Iron Bank of Braavos still demanding its money, pledges for new loans from Myr received no favorable response, and their hopes of replenishing the treasuries with the fabled wealth on Dragonstone following Ser Loras's capture of the island have proven in vain. Mace Tyrell reacts angrily to that, arguing that Loras searched the castle and found no trace of gold or gemstones, nor the fabled cache of dragon eggs supposedly kept there; Kevan personally thinks that Loras didn't look very hard, given that he is a young man prone to rash judgments, even more so following his injuries, and the Valyrian sorcery used to construct Dragonstone likely hides many secrets, but Kevan defuses the argument by suggesting Stannis likely took everything of value with him when he fled. Kevan also suggests that Harys try Pentoshi magister moneylenders, or else go to Braavos and deal with the Iron Bank in person.

Next, business turns to the forthcoming trials; Kevan says that Cersei has chosen trial by battle, with Ser Robert Strong to represent her as her champion. Tyrell and Tarly express deep misgivings about the man, which Kevan shares as they have all heard rumours: Meryn Trant says he has never seen Strong eat or drink, and Boros Blount claims to have never seen him use the privy. Kevan muses that "Dead men don't shit", suspecting that he and the others know who Strong really is. However, Kevan silences Mace's protests by arguing that if Cersei loses her trial, the legitimacy of her children, and thus Margaery's claim to the throne as Tommen's queen will be called into question. He also assures the council that even if Cersei proves her innocence, she will be sent back to Casterly Rock afterwards, and play no further part in ruling or Tommen's education.

The meeting adjourns, intending to reconvene in five days' time and leaving for later decisions about an inheritance involving House Rosby and six claims, as well as the preparation for Myrcella's upcoming marriage. Mace Tyrell makes plain his scorn for the marriage, particularly after Myrcella's injuries, and suggests a better match for her; Kevan muses that Mace likely has his son Willas in mind. He dismisses the idea, warning that reneging on Myrcella's betrothal now could be all the cause Doran Martell needs to side with Connington. Harys Swyft suggests that they get the Dornish to deal with Connington and his pretender; Kevan agrees that it would save them a lot of trouble. After Tyrell and Tarly are gone, Pycelle asks Kevan for guards, fearing that Mace Tyrell means to do him harm for his part in Cersei's claims about Margaery, but Kevan dismisses his concerns. 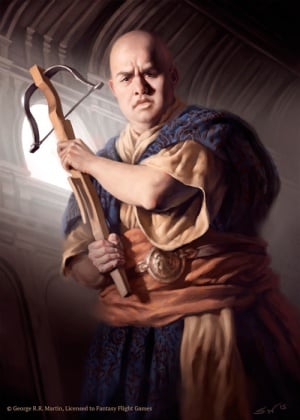 It is snowing heavily in King's Landing and Kevan retires to his study for a time to warm up. He muses on the possibility of raising his son Lancel to the Kingsguard to end his newfound piety, before his thoughts turn to Cersei, the charming and sweet girl once was; he believes that, had Aerys accepted Tywin's offer and wed his son to Cersei, Rhaegar would never have looked twice at Lyanna Stark, and perhaps many now dead would still be alive. He then thinks on Cersei's walk of shame and how similar it was to what Tywin did to their father's mistress, but Kevan reassures himself it was necessary; the Faith had to be appeased, and left unchecked, Cersei would have corrupted Tommen as she did Joffrey.

Kevan then goes to Cersei's chambers, where he has dinner with her and Tommen. Cersei is very calm and guarded after her walk of atonement, which Kevan thinks a good sign. She makes a humble request that Taena Merryweather attend on her once more after the trial and that her son be brought to court as a companion for Tommen; she also asks after her brothers, but Kevan has no news of Jaime or Tyrion. He also says that he has imprisoned the remaining Kettleblack brothers for their crimes of fornicating with a Queen; if they confess, he will send them to the Wall. If not, they will face Robert Strong.

A messenger then announces that Grand Maester Pycelle is asking for Kevan's presence. Kevan arrives at the Maester's chambers and enters to find a white raven sitting on the window ledge, a sign from the Citadel that winter has come. Kevan turns to leave, and is hit in the chest by a crossbow bolt. He calls out for help, but then sees Pycelle sat at his table, already dead. For one moment, Kevan calls out to Tyrion, thinking his nephew responsible, but a familiar voice tells him otherwise as the real killer emerges: Varys. Varys explains to the dying Kevan that he bears the man no ill will, that Kevan is simply a good man in service to a bad cause, but he was becoming too successful in uniting the realm behind Tommen and undoing the damage Cersei had caused. The eunuch adds that Cersei will suspect the Tyrells (with help from the Imp) for Kevan's murder, the Tyrells will blame her, someone will blame the Dornish and the alliances shoring up Tommen's hold on the Iron Throne will crumble as Aegon makes his presence known at Storm's End and the realm flocks to the side of the Targaryens.

Kevan insists that Aegon was killed during the Sack of King's Landing but Varys explains otherwise; that Aegon has been groomed since birth to be king, taught not just in skill at arms and ruling, but how to look after himself, what it means to go hungry, to be hunted and most importantly, that it is his duty to rule, not his right, and to put his people first. Varys then summons some of his "little birds" and instructs them to finish the dying Kevan off.