Arya is chasing a cat when Myrcella and Tommen discover her. She escapes unidentified, but finds herself in the dungeons. There she overhears two men talking about killing her father. After eventually finding her way out she tries to tell her father what she heard but he does not believe her.

Arya is chasing a one-eared black tomcat as part of her training with Syrio Forel. Arya has found that catching cats is hard; half-healed scratches cover her hands and her knees are scabbed from tumbles. At first, even the fat kitchen cat could avoid her. As she stalks the black tom, Arya recalls when she originally went to Syrio with her hand bleeding. He told her she was too slow and that her enemies would give her more than scratches. The castle is full of cats, all of which she has caught and brought to Syrio, except for this one, which a gold cloak claimed was older than sin and twice as mean; it had even snatched a quail from Lord Tywin’s fingers once. Arya has chased the cat all over the castle and she does not know where she is, but she has finally cornered the cat in a narrow alley.

The tomcat tries to dart between her legs, but Arya catches it. As she excitedly hugs the cat to her chest and gives it a kiss, she is interrupted. Princess Myrcella, at the end of the alley, asks what “that boy” is doing with that cat. With her are a couple of the Lannister household guards, a septa, and Prince Tommen. She asks again, and calls Arya a ragged boy, which Tommen agrees with. Arya pauses a moment to look at her ragged clothing (you don’t wear silks and skirts when catching cats). To avoid being recognized, Arya falls to one knee. The septa tells her that she does not belong in this part of the castle. Arya is sure that as soon as she speaks the children will recognize her. The septa tells the guards to bring Arya to her. Arya panics and escapes the grasp of the guard, runs over the prince, and avoids the other guard. After a short chase, Arya sees a window above her, not much more that an arrow slit wide. She leaps up, grabs the sill, and pulls herself through, holding her breath to get through.

Arya continues her rush, ending up lost in a dark cellar and thinking of the trouble she will be in if she was recognized. After listening for a long time, she hears no pursuit. She remembers her nightmares of getting lost in the Red Keep, even though her father had told her it was smaller than Winterfell. Arya plans to count to 10,000; by then it will be safe to come out.

By the time she reaches 87, Arya can make out the large shapes of monsters all around her. Initially she is afraid, but she soon overcomes her fear and makes her way over to touch one of the monsters. She can tell it is bone and that it is dead, but has a feeling that it knows she is there and that it does not love her. She backs into a larger one and whirls around, causing a tooth to rip her leather jerkin. She runs, avoiding a larger monster, and dashes through the jaws of another to find a door. She opens it enough to slip through into the even darker hall beyond. She remembers that a Water Dancer can see without eyes. As she proceeds down the hall by feeling the walls, Arya remembers that all hallways lead somewhere. Then she hears noises and sees a dim flickering light, which allows her to see that she is above a well with steps leading down. 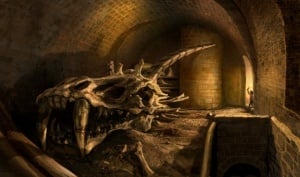 The dragon cellar of the Red Keep.

Arya can see two men coming up the well and hears the echo of their voices, one of which is thick with the accent of the Free Cities. She quickly discovers that the men are talking about her father when one explains to the other that the Hand will soon learn the truth. When the second man asks what the Hand will do with the truth, the first replies that only the gods know, because the Hand is not a man to put aside the attempt on his son’s life and that soon the wolf and the lion will be at each other’s throats. The other man insists that a war now would do no good because they are not ready.

As the men get nearer, Arya can see more of them. The one bearing the torch is fat with a scarred face and a stubble beard who moves quietly despite wearing heavy boots and a steel cap. Arya finds him oddly familiar but cannot recognize him. She is sure that she has never met the man with the accent. He has a forked beard and is grossly fat, yet moves lightly like a Water Dancer.

When the torchbearer asks what he might possibly do to prevent a war, the fork-bearded man asks, “If one Hand can die, why not a second?” The torchbearer insists that times have changed and that the current Hand is not like the other. The fork-bearded man insists that they need more time: the princess is with child and the khal will not bestir himself until his son is born.

The torchbearer insists that if the khal does not bestir himself soon it may be too late, because there are new players in the game. Stannis Baratheon and Lysa Arryn are rumored to be marshalling their strength, Lord Renly and the Knight of Flowers plan to make Margaery Tyrell King Robert’s new queen, and no one knows what Littlefinger is playing at. Yet the torchbearer insists that Eddard Stark worries him the most; he now has the book and the bastard and soon the truth. His wife has also taken the Imp prisoner and Jaime and Lord Tywin will take this for an outrage.

The torchbearer claims that, even with his skill, he cannot keep control much longer, but does agree to do what he can, saying he requires more gold and 50 more “birds.” The forked beard responds that 50 is a lot, given that they are so young to know their letters. He suggests that if they could keep their tongues it would be easier, but the torchbearer replies that the risk is too great.

Arya follows the two men for a long time, going deeper and deeper down the hall until dirt and timbers replace the dressed stone. After miles of following, the men are gone and Arya, blind and lost, can see no way to go but forward. At the end she is knee deep in stinking water, and eventually, she finds herself at the mouth of a sewer that empties into the river. She is so dirty and stinky that she removes her clothes and swims until she feels clean. When she looks around, Arya can see the Red Keep on its hill, miles away.

When she finally reaches the gate to the Red Keep and asks to be let in, the two gold cloaks on guard sneer at her because she looks like a beggar. She tells them she is not a beggar, she lives there, and she wants to see her father. One of the guards jokes that he wants to fuck the queen for all the good it does him. When Arya insists her father is the Hand of the King, one of the guards tries to strike her, but she jumps away and insists she is Arya Stark and that if they lay a hand on her their heads will end up on spikes. She offers that if they need proof of who she is Jory Cassel or Vayon Poole can vouch for her. She finishes by asking the startled guardsmen if they will open the gate or need a clap on the head to improve their hearing. 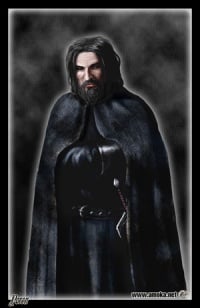 Yoren of the Night's Watch

Arya is brought to her father in his solar by Tomard and Harwin. He is bent over the biggest book Arya has ever seen. As he hears the report, his face is stern. He then tells her that he had half his guard searching for her, and that she is not supposed to go beyond the gates without his leave. She replies that she was in the dungeons, and they turned into tunnels, she did not have a light, and she could not go back the way she came because of the monsters. She then continues to say that two men were talking about killing him. They said that he had a book and a bastard, and if one Hand could die, why not another. Ned is confused. Arya describes the two men, and that they said that the wolf and lion would eat each other. Everything mixes up in Arya’s head. She tells her father that she thinks one was a wizard. She decides not to mention knocking over the prince, and how she went into a window and found monsters. Ned confirms that the men were talking about juggling and mummers, and tells her that they must be mummers and that there must be a dozen troupes in King's Landing now. Arya tries to tell him that they were not mummers, but he interrupts her, saying she should not be spying on people. Then he states he does not want his daughter crawling through strange windows going after stray cats and notes all the scratches on her arms. He continues by stating this has gone on long enough and that he wants a word with Syrio. The announcement of an arrival from the Night's Watch interrupts their conversation.

Yoren is ushered in and Ned greets him pleasantly despite his being stooped, ugly, smelly, and in unwashed clothes. Yoren apologizes for the hour, and states that Ayra has the look of Ned’s son. Arya replies that she is a girl, and then asks about her brothers since she assumes Yoren must have come by way of Winterfell, and if he can deliver a letter to Jon, thinking Jon will believe her story of the men in the dungeon. Yoren explains to Ned that he is there to find men for the Wall, but he has other news, news that should be told in private. Ned tells Desmond to show Arya to her room. She tries to confirm that nothing bad has happened to Jon or her uncle, and Yoren tells her that Jon is fine.

As Desmond takes her to her room, Arya asks him how many guards her father has. He answers 50. Then Arya wants assurance that they will not let anybody kill her father, so Desmond tells her that they guard him day and night. Arya mentions that the Lannisters have many more men, and he answers that a northerner is worth 10 southerners. When she asks about wizards, he says a wizard dies the same as anyone else when you cut his head off.