Missandei is a Naathi scribe in service to Kraznys mo Nakloz, one of the Good Masters of Astapor. In the television adaptation, Game of Thrones, she is portrayed by Nathalie Emmanuel and depicted as a young woman instead of a child.

Missandei has a round flat face, dusky skin, and eyes like molten gold.[2][3] Although only ten,[4][2] she is very strong-willed and intelligent.[5] She has a sweet, strong voice.[6] Missandei was taught to refer to herself as "this one" instead of using first-person pronouns, a habit she tries to overcome once she is freed from slavery.[5]

Missandei and her brothers were born on the island of Naath. They were eventually captured by raiders from the Basilisk Isles, and sold into slavery in Astapor. Three of her brothers became Unsullied, but one was killed in training, and only Marselen and Mossador remain.[7] She remembers Mossador teaching her to climb trees.[8] Missandei had a noticeable gift, easily learning languages. Consequently, the Good Masters chose to train her as a scribe and translator.[8]

Missandei has been trained to speak the Common Tongue of Westeros, High Valyrian, and bastard Valyrian.[2][7] She has some knowledge of Ghiscari.[9] Missandei has been seen reading scrolls, so she is literate in at least one writing system.[2] 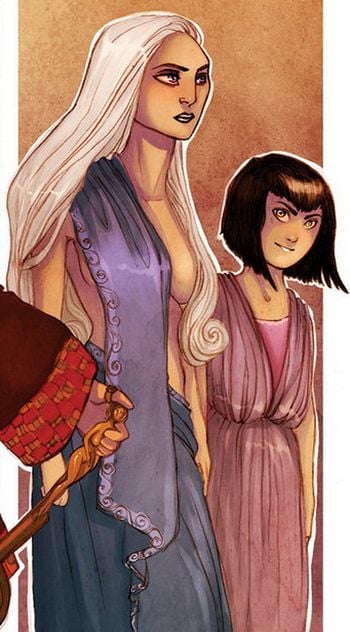 Daenerys and Missandei - by Enife ©

Missandei is a slave interpreter and scribe for Kraznys mo Nakloz, when Daenerys Targaryen comes to inspect the Unsullied in Astapor. She leaves untranslated several of his insults, and edits some of his words to sound more polite and pleasant, leaving out entirely his sexual proposals.[2]

After Daenerys strikes a bargain with the Good Masters of Astapor concerning payment for the Unsullied, Kraznys gives Missandei to Daenerys as an interpreter to give them commands until the Unsullied have learned Daenerys's language. Missandei reveals no feelings concerning the decision.[7] Both the Good Masters and Missandei are under the impression that Daenerys can only converse in the Common Tongue; therefore Missandei is surprised when Daenerys, in High Valyrian, asks her name in order to proclaim her free. As a freedwoman, Missandei is offered employment by Daenerys as a handmaid and interpreter, to be kept close by her side until such time as she chooses to leave. Missandei accepts, saying she has nowhere else to go. As for the fear of danger and death, Missandei responds with the phrase "Valar morghulis". Missandei explains to Daenerys basic information on the Unsullied, and she reveals that three of them were her brothers once.[7]

At the exchange, Kraznys still gives orders to Missandei, despite no longer owning her. Missandei leaves some of his phrases untranslated, such as "whore of Westeros". As the deal concludes, Missandei witnesses the fall of Astapor.[7]

During the initial conflict with Yunkai, Missandei explains to Daenerys that the Yunkai'i speak a Valyrian dialect mutually intelligible to that of Astapor.[9] The night before the battle of Yunkai, Dany is too restless to sleep. Missandei offers to sing her a lullaby of the Peaceful People of Naath, but is turned down.[9] After a three-day siege of Yunkai, the Wise Masters release a large number of slaves to Daenerys. Missandei explains to them that they owe their freedom to Daenerys. She then translates their new term for Daenerys, Mhysa, which is Ghiscari for "Mother".[9]

During the siege of Meereen, Strong Belwas wins a duel against Oznak zo Pahl, but suffers a wound. Dany has Missandei find a healer for him, a Yunkish freedman "renowned for his skill in the healing arts".[10] Dany later calls for Missandei to have the Silver and the girl's own horse saddled, in preparation for a visit to the camps. Missandei offers to call the bloodriders to serve as guards, but Daenerys chooses "Arstan Whitebeard" instead. When Mero attempts to assassinate Daenerys, Missandei calls for help. "Arstan" is able to wound Mero and save Daenerys and Missandei pulls the queen back on her feet. A number of freedmen, likely responding to Missandei's calls, then tear Mero apart.[10]

While contemplating gods, Daenerys recalled Missandei's narrative concerning the Lord of Harmony, and later recalled other details concerning Naath told by Missandei. She notes growing very fond of the girl.[5] With Meereen fallen, Daenerys chooses the Great Pyramid as her new seat. Missandei, Irri, and Jhiqui move to the royal apartments with her, with Missandei sleeping in her own bed.[5] Daenerys promises Missandei to take her "home" to Naath one day, but Missandei replies that she is content to stay with the Targaryen.[5] While contemplating her various allies' and supporters' reliability, Daenerys noted fearing betrayal by all of them.[5]

When Daenerys decides to bury the corpses of Meereen, Missandei offers advice, saying the Ghiscari have their honored dead interred in crypts beneath their manses. She suggested boiling the bones clean, and returning them to their kin for burial as an act of kindness.[5] Missandei attended the initial meeting of Daenerys with Ghael, the envoy of King Cleon of Astapor. Ghael details Cleon's marriage proposal to Daenerys and his promise to give her many strong sons. When Missandei asks about Cleon's sons, Ghael is forced to admit that Cleon only fathered daughters in his previous wedding.[5]

One night Missandei finds Daenerys in the terrace garden. Dany has the girl promise to never lie to her, to never betray her. The two watched the sunrise together, holding hands.[5] When Daenerys berates herself for bringing "death and ruin" to Slaver's Bay, Missandei reminds her that she had brought freedom as well.[5] 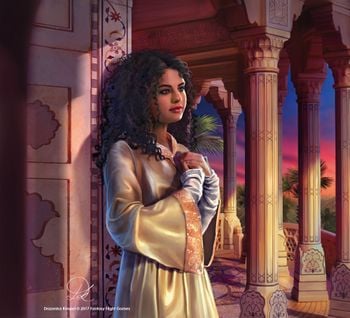 Missandei takes on the role of herald for Daenerys Targaryen.[6] [11] At night, Missandei wakes her to inform her that Stalwart Shield has been murdered. During the day, Missandei announces the entry of Daenerys to the hall. She uses the same opening line every day:[6]

All kneel for Daenerys Stormborn, the Unburnt, Queen of Meereen, Queen of the Andals and the Rhoynar and the First Men, Khaleesi of [the] Great Grass Sea, Breaker of Shackles, and Mother of Dragons.[6]

Missandei is distraught when Mossador, one of her brothers, is killed by the Sons of the Harpy.[8] Before falling asleep one night, Missandei shares some of her memories of Mossador with Dany. The queen again offers Missandei a chance to return to Naath, but she replies that at Naath she would be afraid, easy prey for slavers. She feels safe with the Targaryen, calling her "mother" in a whisper and hugging her tight, and Dany kisses her goodnight.[8] That night Daenerys has a vision of Quaithe, but Missandei finds her at the pool, apparently talking to nobody at all. This makes Dany wonder whether Quaithe was actually there.[8]

When Galazza Galare, the Green Grace, arrives at the Great Pyramid escorted by a dozen White Graces, Daenerys tasks Missandei with having the girls fed and entertained.[12]

Following a visit to the camps of refugees outside Meereen, Daenerys invites Missandei to join her in the water. While swimming, the girl claims to have heard strange sounds in the night: someone scratching at the wall's old, crumbling bricks. She believes the Astapori are trying to enter. Irri and Jhiqui claim to have heard nothing that night. Daenerys dismisses the sounds as mere dreams.[13] Viserion is later discovered to have used his flame and claws to carve a hole in the walls.[14]

Two nights prior to her wedding, Daenerys has a sexual encounter with Daario Naharis. In the morning, Missandei asks about her health, having overheard the sounds of the lovemaking, but having misunderstood their meaning:[3]

In the black of night this one heard you scream.[3]

At dawn on Daenerys's wedding day, Missandei insists that the queen should have a simple, full breakfast of goat cheese, olives, and raisins. She points out that Daenerys needs her strength, and mere wine is not enough. She also points out that Dany is "such a tiny thing". She understands that Dany has second thoughts about the wedding, suggesting that it is not too late to cancel the wedding. Missandei insists that Dany does not love Hizdahr and could choose another husband, but Dany responds that a queen marries for duty, not love.[3] Missandei reports that both Reznak mo Reznak and Skahaz mo Kandaq wish to escort the queen to the Temple of the Graces, as part of her marriage procession. Dany insists on riding the Silver to the Temple, until Missandei reminds her that "you cannot ride in a tokar". Missandei arranges a sedan chair for her.[3] Missandei has turned eleven by the time Daenerys marries Hizdahr zo Loraq.

Following the wedding, Daenerys has a disappointing consummation with Hizdahr. Missandei does her best to comfort Daenerys, sharing her memories with Dany. She is still talking when the queen falls asleep.[15]

Missandei washes Daenerys's hair prior to visiting the fighting pits, their long awaited re-opening. When Daenerys claims that half of Meereen would be there to see her, Missandei insists that the spectators only want to see men bleeding and dying. Missandei later reports that Quentyn Martell and his Dornishmen are expecting an audience.[16]

When Daenerys disappears on Drogon's back, her consort Hizdahr takes full control of Meereen. He has Missandei replaced as herald, citing that it is undignified for a king to use a child or a former slave as a herald.[16][11] Irri and Jhiqui move out of the royal apartments, leaving Meereen with most of Daenerys's Dothraki khalasar. The khalasar has set out to search the Dothraki sea for their missing queen. Hizhar chooses to establish his own suite of rooms, and Daenerys's cupbearers move with him. This leaves Missandei the only occupant of the royal apartments, described by Ser Barristan Selmy as a "forlorn little ghost".[11]

Barristan continues sharing the apex of the Great Pyramid with Missandei, having his own cell by the royal apartments.[11][17] Missandei assures him that Daenerys would not leave without them. She reveals that Skahaz, the former leader of the Brazen Beasts, has asked for a secret meeting with Barristan, who send his own reply through the former herald.[11]

Before his coup d'etat against Hizhahr, Barristan warns Missandei to not leave the queen's chambers for any reason that night.[18] He deposes Hizdahr and is proclaimed Queen's Hand, ruling in the name of the missing Daenerys. He arranges for Quentyn Martell, mortally burned by Rhaegal, to be transferred to the bed of Daenerys. Missandei takes care of the wounded man for three days, sitting at his bedside night and day and offering him water and milk of the poppy. Barristan tries to arrange some assistance for her efforts, but the cupbearers fear the sight of the burned Dornishman, and the Blue Graces do not reply to his summons. Missandei reports the death of Quentyn just before the dawn. She is certain that the "Dornish gods" took him home and that Quentyn smiled at death, finally beyond pain.[14][19]

Missandei aids Ser Barristan in taking control of the court of Meereen. He uses one of her ideas in negotiations with the enemy, offering each man's weight in gold ransom for the release of the hostages (Daario Naharis, Hero, Jhogo). While the Wise Masters neither want nor need the gold, their mercenaries are likely to support the deal, creating division in the enemy ranks. Barristan finds Missandei's strategy reminiscent of both Petyr Baelish (whose plans included bribes) and Varys (whose plans included fostering division in the enemy ranks).[19]

The little scribe with the big golden eyes was wise beyond her years. She is brave as well. She had to be, to survive the life she's lived.[5]

She relied so much on the little scribe that she oft forgot that Missandei had only turned eleven.[3]

Eleven years of age, yet Missandei is as clever as half the men at this table and wiser than all of them.[19]

—thoughts of Barristan Selmy, comparing Missandei to the ruling council of Meereen