Jhiqui is a Dothraki handmaid of Daenerys Targaryen.

In the television adaptation Game of Thrones, Jhiqui is portrayed by Sarita Piotrowski.[3]

Jhiqui has skin the color of copper, with black hair and almond-shaped eyes.[4] She has wide hips and heavy breasts, and is bigger boned than Irri.[5]

She is of an age with Daenerys Targaryen and Irri.[6]

Jhiqui was born to a khal of a khalasar. It was destroyed by Khal Drogo, and she was enslaved.[6] 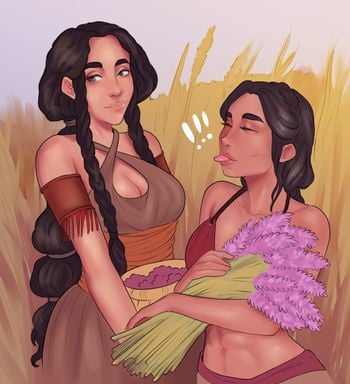 Irri and Jhiqui, by Rae Lavergne ©

Jhiqui remains with Daenerys after the death of Khal Drogo.[7]

After struggling through the red waste, Irri and Jhiqui attempt to convince Daenerys not to stay in Vaes Tolorro, believing it haunted by ghosts.[8]

After Daenerys destroys the House of the Undying, Jhiqui fastens a silver bell in her braid to mark the victory.[9]

Jhiqui and Irri are seasick during the voyage to Astapor.[10] Jhiqui is present when Daenerys purchases the Unsullied. Jhiqui and Irri free Rhaegal and Viserion to attack the Astapori slavers when Daenerys has the Unsullied attack their former masters.[11] She later praises Strong Belwas in defeating Oznak zo Pahl and remarks she would braid his hair the Dothraki way if he had any.[12]

Jhiqui and Irri both develop a crush on Rakharo, who has grown more tall and muscular. They argue over which of them he would prefer.[13]

Jhiqui later accompanies Daenerys to Daznak's Pit as part of the royal procession.[14] She and Irri both depart Meereen as part of the search parties dispatched across the Skahazadhan to locate Daenerys after she disappears on Drogon's back.[15] 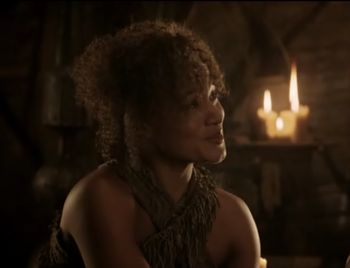 Sarita Piotrowski as Jhiqui, in Game of Thrones

Daenerys: Have you ever seen a dragon?


Irri: Dragons are gone, Khaleesi.
Jhiqui: Dead. Long and long ago.
Daenerys: Everywhere? Even in the east?
Irri: No dragon. Brave men kill them, for dragon terrible evil beasts. It is known.

Daenerys: I have won no victories.
Jhiqui: You burned the maegi in their house of dust and sent their souls to hell.[9]


Jhiqui: Unless you killed them yourself. That is known.