Daenerys Targaryen is married to Khal Drogo in a ceremony that lasts all day with a dozen deaths. When night falls, Drogo takes Daenerys for a long ride before making love.

While waiting for Daenerys' wedding, Illyrio Mopatis explains that Drogo's khalasar of 40,000 Dothraki warriors and their families and herds gathered outside the walls of Pentos have made the other magisters so uneasy that they have doubled the city guard. The Dothraki are eating everything in sight, and Illyrio thinks it would be best to have the marriage as soon as possible. Ser Jorah Mormont has offered and been accepted into the service of Daenerys' brother Viserys. Viserys is impatient for Drogo to help him regain his throne. Illyrio explains to him that the Khal must take his new bride to Vaes Dothrak first, and then wait until the omens are favorable for war. Viserys complains at the delay despite Illyrio and Jorah cautioning patience.

That night, Daenerys dreams of Viserys chasing and beating her and saying, "You woke the dragon." Then she turns to see a dragon in his place and wakes shaking with a fine sheen of sweat on her skin. 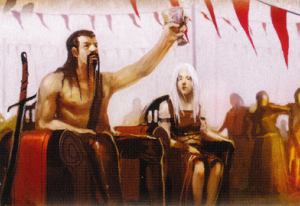 Drogo and Daenerys at their wedding feast

Daenerys weds Khal Drogo under the open sky, before forty thousand Dothraki warriors. The ceremonies begin at dawn and continue until dusk. Viserys, Illyrio, and Jorah are seated below Drogo and Daenerys at the feast, which grates on Viserys' pride, especially when food is first served to Daenerys and Drogo before being offered to him. Daenerys, with the forced smile her brother told her she should wear, eats little since her stomach is upset. She is seated only with her new husband, and they do not even share a common language, so there is nothing for her to do.

Early on in the day she sees Dothraki men taking dancing women and mounting them in the open like animals. When two men grab the same woman, a fight to the death ensues. The survivor then takes another woman. Illyrio has told her that a Dothraki wedding without at least three deaths is considered dull; by the end of the day a dozen men have died, obviously making it an exceptional wedding. Daenerys is consumed by fear of her hulking husband with a stern cruel face and a culture that is so different, and of her brother if she should fail him.

As the sun sets, Daenerys receives her bride gifts. Viserys gives her three hand maids that cost him nothing, picked to teach her what she needs to know: Irri (to teach her how to ride), Jhiqui (to teach her the Dothraki tongue) and Doreah (to teach her the arts of love). Ser Jorah, with an apology since it was all he could afford, gives her a stack of old books in the Common Tongue, and she thanks him with all her heart. Illyrio gives her fine silks and fabrics, and three huge dragon's eggs: one is green, one is cream-colored, and one is black with scarlet ripples and swirls. Illyrio tells her that they have turned to stone over the years. Khal Drogo's bloodriders give her the traditional three weapons, which she refuses with the traditional refusals and passes to her husband. Many other gifts come from the other Dothraki. 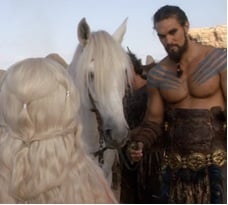 Last of all Drogo brings forward his own bride gift, a fine grey filly. Drogo easily lifts her by the waist up to the saddle. She does not know what to do. Ser Jorah tells her to take the reins and ride. She is only a fair rider, having traveled almost exclusively by other means, but as she rides, she forgets her fears and eventually sends the horse into a gallop, and even has it leap over a firepit. She returns and tells Illyrio to tell her husband that he has given her the wind, and Drogo smiles. Then the sun sets and Drogo readies his horse. When Viserys warns her to please her husband, lest she will regret it, fear comes back to her.

Drogo sets a fast pace, saying nothing. Daenerys tries to rid herself of her fear by remembering she is the blood of the dragon and the dragon is never afraid. It is full dark when they stop at a grassy place beside a small stream. Drogo swings off his horse and lifts her down from hers. She feels fragile in her wedding silks. She begins to weep, but Drogo says "No," and wipes her tears away. She asks questions but all Drogo says is “No.” He starts softly murmuring to her in Dothraki to soothe her. Drogo sets her down on a rock and sits facing her, then starts removing the bells from his hair, and Daenerys helps. Then he indicates that she should unbraid his hair, which takes a long time. Then Drogo undresses her, with tenderness, and caresses her until she is ready for him. When he bares her breasts, she covers herself with her hands but Drogo gently pulls her hands away. After he finishes undressing her, he watches her for a while. Then he begins to touch her face and hair. It seems like hours to Daenerys before his hands go to her breasts. This makes Daenerys breathless, and when he seats her on his lap and asks “No?” she moves his hand inside her and says “Yes.”

This page uses content from Wikia. The original content was at A Game of Thrones: Chapter 11. The list of authors can be seen in the page history. As with A Wiki of Ice and Fire, the content of Wikia is available under the GNU Free Documentation License.