Qotho is a bloodrider to Khal Drogo.[1] In the television adaptation Game of Thrones he is played by Dar Salim.[2] 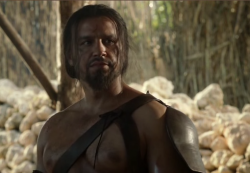 Dar Salim as Qotho in HBO's Game of Thrones

As a wedding gift to the newly-wed Daenerys Targaryen and Khal Drogo, Qotho gives them a double curved dragonbone bow.[3]

Qotho is known as the most sadistic of Drogo's bloodriders. He has cruel eyes and quick hands that like to hurt. He leaves bruises on Doreah’s pale skin, and sometimes makes Irri sob in the night. Even his horses react to him with fear.[4]

When Viserys Targaryen bares steel during a feast in Vaes Dothrak and threatens Daenerys, Drogo orders his bloodriders to seize him. Qotho pins Viserys while the others disarm him.[5]

After Drogo's injury, Daenerys intends to take her husband to the maegi Mirri Maz Duur to heal him, but Drogo's bloodriders, including Qotho, attempt to stop this from happening. Qotho kills Quaro in the ensuing fight and is in turn killed by Ser Jorah Mormont.[6]

See also the Qotho article on the Game of Thrones wiki.