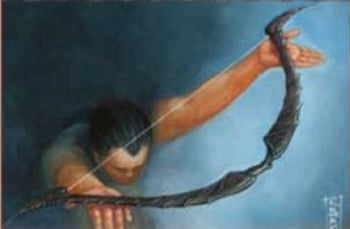 Dragonbone, or dragon bone,[1] is a black material that is created from the bones of dragons.

Dragonbone is black due to its high iron content. It is used to make many items of value because of its rarity and its special properties. It is as strong as other metals, such as steel, yet lighter and more flexible.[2] Rare dragonbone bows are highly sought after,[3] as they can outrange even the goldenheart bows of the Summer Isles.[4]

The heraldry of House Willum depicts a dragonbone skeleton.[5]

It is disputed if the Grey King's Hall on Nagga's Hill on Old Wyk is made from the petrified bones of the legendary sea dragon Nagga or not.[6]

Dragonbones have been found as far north as the island of Ib, and as far south as in the jungles of Sothoryos.[1]

Upon ascending the rule of Dorne after the death of his mother, Prince Nymor Martell send a peace delegation to King's Landing, which included the skull of Meraxes, to stop the First Dornish War.[7][8]

Lord Rogar Baratheon often boasted that his axe was "large and heavy enough to cleave through a dragon's skull.[9]

Among her efforts to rebuilt Tumbleton after the Dance of the Dragons, Lady Sharis Footly had the heads of the dragons Seasmoke and Vermithor cleaned and displayed in the town square, where travelers paid a penny to look at them, and a star to touch them.[10]

Sandoq the Shadow wielded a great curved sword of Valyrian steel with a dragonbone hilt.[11]

During the rule of House Targaryen over the Seven Kingdoms, the skulls of some of their dragons decorated the walls of the throne room in the Red Keep. The skulls were stored in a dank cellar after Robert's Rebellion and replaced with banners and tapestries.[2][12][13]

A catspaw tries to assassinate Bran Stark with a Valyrian steel dagger whose hilt is plain dragonbone.[17]

The slaver's whip of Kraznys mo Nakloz has a dragonbone handle inlaid with gold.[18]