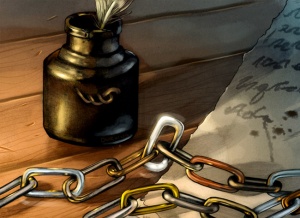 Steel is hard metal, often used to make weapons and armour. Iron is the base metal of steel.

The blades of the Others are so cold that they shatter a steel blade on impact.[1][2]

The scales of a full-grown dragon are harder than steel.[3] The fire of such a dragon is hot enough to melt steel and stone.[4]

Wildfire can seep into steel, which then goes up in flames.[5]

Princess Rhaenys Targaryen wore a steel and copper armor which flashed in the sun.[6]

Although Ser Jaime Lannister's armor appears to be made of gold, it is really gilded steel.[8]

In the field Lord Randyll Tarly wears mail and boiled leather with a breastplate of grey steel.[10]

Lord Tywin Lannister's plate armor is made of steel and is enameled in deep crimson and highlighted with gold, and its rondels are golden sunburts.[11]

Brienne of Tarth's dented steel armor is of a brilliant deep blue cobalt.[12]

Steel is one of the metals used by maesters for their chain links.[14]

The Street of Steel in King's Landing is named after the metal.[15]

Steel Rain is an old reaving song sung by ironborn.[16]

The Steel Road is one of the three mountain pass through the Bone Mountains in Essos.[17]

Masters-at-arms can provide blunted weapons for training instead of live steel.[18]

It is forbidden to bare steel in Vaes Dothrak.[19]

Several characters in the series have alias based on the metal:

The Valyrian Freehold made a metal of unparalleled quality named Valyrian steel.[27]

Ser Byron Swann meant to kill a dragon during the Dance of the Dragons with a spear and a shield of silvered steel, thus mimicking the legend of Serwyn of the Mirror Shield who slew the dragon Urrax.[24]

Hugh Hammer was said to be so strong he could twist steel bars into torcs with his bare hands.[24]

When looking in the Night's Watch's archives, Samwell Tarly reads about dragonsteel, which he and Jon Snow think might have been Valyrian steel.[2][28]

Rogar: Sheath your steel and move aside. Have you forgotten? I am the King's Hand.
Samgood: Aye, but we're the Kingsguard, not the Hand's guard, and it's the lad who sits the chair, not you.[29]

My new Hand is a steel fist. We are done with writing letters.[6]

Robert was the true steel. Stannis is pure iron, black and hard and strong, yes, but brittle, the way iron gets. He’ll break before he bends. And Renly, that one, he’s copper, bright and shiny, pretty to look at but not worth all that much at the end of the day.[30]