Tobho Mott is a Qohorik master armorer whose shop is at the top of the Street of Steel in King's Landing.[1] In the television adaptation Game of Thrones he is played by Andrew Wilde.[3]

Tobho is stubborn and loyal to his staff. He owns a black velvet coat which has silver hammers embroidered on the sleeves. A large sapphire hangs on a heavy silver chain about his neck.[1]

Tobho's house, made of timber and plaster, is larger than all other buildings on the Street of Steel. Its upper stories tower over the street, and Tobho lives above his shop. The double doors have an ebony and weirwood carving of a hunting scene. Two stone knights armored in red suits of armor in the shapes of a griffin and a unicorn guard the entrance. Tobho employs a slim serving girl in the house. Journeymen and apprentices, such as Gendry, work in his shop, a cavernous stone barn behind the house.[1]

Tobho learned to smith in Qohor. He is one of the few armorers who can work Valyrian steel,[4] and claims to be the only armorer in King's Landing who can add tint to the metals in a suit of armor without using paint.[1] Ser Loras Tyrell and Lord Renly Baratheon are among the nobles who have purchased armor from Tobho.[1] 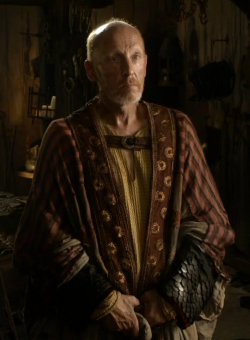 Andrew Wilde as Tobho Mott in Game of Thrones

Lord Eddard Stark visits Tobho's shop in an effort to discover the killers behind the death of Lord Jon Arryn, since a potboy told Jory Cassel that Jon had been considering commissioning plate wrought in pale silver with a blue jasper falcon and a mother-of-pearl moon on the breast.[1] When Eddard asks if he made a falcon helm for Lord Arryn, Tobho explains that Jon and Lord Stannis Baratheon did not patronize his work, but instead were interested in one of his blacksmiths. Tobho introduces Ned to Gendry, one of King Robert I Baratheon's unacknowledged bastards who had been working for him as an apprentice. While protective of Gendry's identity, Tobho reveals that the boy's apprentice fee was paid by a stout, brown-bearded man who wore a hooded velvet cloak.[1]

Gendry reveals to Arya Stark that he was ordered to join the Night's Watch by Master Mott.[5] According to a semi-canon source, Lord Varys had Tobho send Gendry to Yoren to protect the boy after Ned's downfall.[6][7]

At Lord Tywin Lannister's request Tobho melts Eddard's Valyrian steel sword, Ice, to forge two new swords. The armorer admits that he tried to color the swords the crimson of House Lannister, but despite his spells the steel darkened to grey and red patterns.[4] 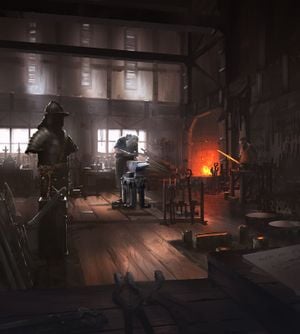 My work is costly, and I make no apologies for that, my lord. You will not find craftsmanship equal to mine anywhere in the Seven Kingdoms, I promise you. Visit every forge in King's Landing if you like, and compare for yourself. Any village smith can hammer out a shirt of mail; my work is art.[1]

The direwolf is the sigil of House Stark, is it not? I could fashion a direwolf helm so real that children will run from you in the street.[10]

Eddard: You know who the boy is. That is not a question.
Tobho: The boy is my apprentice. Who he was before he came to me, that's none of my concern.[1]

He decided that he liked Tobho Mott, master armorer.[1]

Tobho Mott on the Game of Thrones wiki