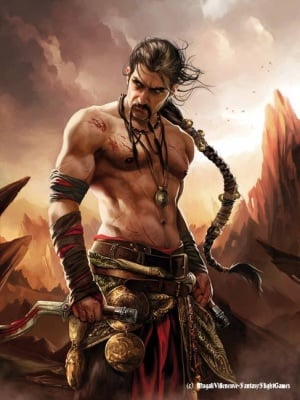 The Dothraki Khal Drogo, with bells in his braided hair - by Magali Villeneuve 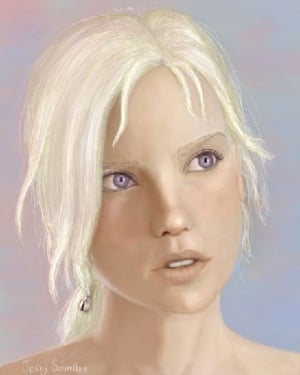 Khaleesi Daenerys Targaryen wearing a silver Dothraki bell in her hair, signifying a victory - by jekaa

Tiny bells that ring are worn in the hair of victorious Dothraki warriors. Each bell signifies a victory that the man has won. The more victories, the more bells in a warrior's braid.[1] The bells can be made of gold, silver, or bronze.[2] Dothraki women do not wear bells in their hair; however, Khaleesi Daenerys Targaryen is known to wear bells in her hair for the victories she has won.[3] Even if a khalasar is not glimpsed, the sound of the warrior's bells tells their foes that the Dothraki are near.[4]

When Daenerys Targaryen first sees her future husband Khal Drogo, she notes that his heavy black braid is hung with tiny bells that ring softly as he moves.[5] After their wedding, before they consummate the marriage, Drogo removes all his bells and unbraids his hair, with Dany's help.[6] When Khal Drogo's khalasar defeats Ogo's khalasar, he adds Ogo's and his son Fogo's bells to his hair.[7] When Daenerys prepares Drogo for his funeral pyre, she puts all of his bells in his hair.[2]

Jhiqui follows Dothraki custom, and fastens a silver bell in Daenerys Targaryen's hair to mark her victory over the Undying. Daenerys tries to tell her that she has won no victories, but Jhiqui disagrees, telling Dany that she burned the maegi in their house of dust and sent their souls to hell. Daenerys decides to hold her tongue, thinking that the Dothraki will esteem her all the more for a few bells in her hair. When she goes to mount her silver she chimes, and again with every stride, but neither Ser Jorah Mormont or her bloodriders make mention of it.[3]

Upon entering Astapor to purchase her Unsullied, Dany is garbed in Dothraki fashion. Irri and Jhiqui have braided her hair and hung it with a tiny silver bell whose chime sings of the Undying of Qarth, burned in their Palace of Dust.[8]

After conquering Meereen, silver bells tinkle in Daenerys's bloodriders' oiled braids, and they wear the gold and jewels of dead men.[11]

As Queen of Meereen, Dany adopts the Meereenese style of dress, and forgoes her Dothraki bells.[12] Daenerys's bloodrider Rakharo returns from subduing the hinterlands of Meereen with four bells in his hair.[13]

On the Shy Maid, Haldon Halfmaeaster explains to Tyrion Lannister that on the way down from the Sorrows to Selhorys, the boat's crew thrice glimpsed Dothraki riders moving south along the river's eastern shore. Once they were so close, they could hear the bells tinkling in their braids.[4]

As Dany wanders the Dothraki Sea, starving and alone, she hears through the grass a soft silvery tinkling. At first she smiles, remembering Khal Drogo, then she thinks that her bloodriders have found her, but then the green sea opens and a unknown Dothraki rider appears, bells singing in his hair. Dany realises that he is a khalasar scout, and she is in great danger. The scout does not see her. When he gallops away, Dany manages to call Drogon down to her.[14]

I am the Lord of the Seven Kingdoms, not some grass-stained savage with bells in his hair.[15]

As swift as the wind he rides, and behind him his khalasar covers the earth, men without number, with arakhs shining in their hands like blades of razor grass. Fierce as a storm this prince will be. His enemies will tremble before him, and their wives will weep tears of blood and rend their flesh in grief. The bells in his hair will sing his coming, and the milk men in the stone tents will fear his name. The prince is riding, and he shall be the stallion who mounts the world.[16]

—one of the dosh khaleen, to Daenerys

He slew two khals this day. Khal Ogo first, and then son, Fogo, who became khal when Ogo fell. His bloodriders cut the bells from their hair, and now Khal Drogo's every step rings louder than before.[7]

Dany braided his hair and slid the silver rings onto his mustache and hung his bells one by one. So many bells, gold and silver and bronze. Bells so his enemies would hear him coming and grow weak with fear.[2]

—Daenerys Targaryen, preparing her husband for his funeral pyre

Once they were so close they could hear the bells tinkling in their braids.[4]