Oznak zo Pahl is a noble from Meereen, a scion of the House of Pahl, an ancient slaving family.

Oznak wears his hair in the shape of two ram's horns. He wears pink and white, the colors of the House of Pahl. His armor is of copper and jet scales.[1]

Oznak once cut the liver out of a man, Scarb, who had looked at a Meereenese lady wrongly. He claimed he was defending her honor. His father commands the city guard of Meereen and his uncle is the richest man in the city.[1] 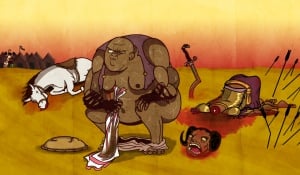 When Daenerys Targaryen besieges Meereen, Oznak rides out of Meereen on a white charger, armed with a fourteen foot lance, and challenges Daenerys Targaryen to send forth a champion. Oznak insults Daenerys's men for an hour, and leads the city's defenders in pissing in her direction. Finally Daenerys sends Belwas, who sidesteps Oznak's charges three times. On the fourth charge, Belwas wounds Oznak's horse. Leaping clear of his mount, Oznak crosses blades with Belwas, who allows Oznak to cut him once before killing him and severing his head from his body. Afterward, Belwas defecates in the direction of Meereen and wipes himself using Oznak's cloak.[1]

I knew a man, Scarb, this Oznak cut his liver out. Claimed to be defending a lady’s honor, he did, said Scarb had raped her with his eyes. How do you rape a wench with eyes, I ask you? But his uncle is the richest man in Meereen and his father commands the city guard, so I had to run like a rat before he killed me too.[1]