Ser Waymar Royce is a knight of House Royce. The third and youngest son of Lord Yohn Royce of Runestone, he became a ranger of the Night's Watch. In the television adaptation Game of Thrones, Waymar is played by Rob Ostlere.

Waymar is handsome, graceful and slender, with grey eyes. He wears leather boots, woolen pants, moleskin gloves, a sable cloak, and ringmail over layers of wool and boiled leather, all in black.[3] Waymar rides a black destrier and wields a longsword, the hilt of which is decorated with jewels.[3]

Waymar displays a sense of entitlement as well as arrogance towards more experienced members of the Night's Watch.[4]

As a third son of a lord, Waymar had few chances at wealth or land and so joined the Night's Watch.[3] He was escorted by his father, Lord Yohn Royce, north to the Wall. While they stayed at Winterfell as guests on the way, Sansa Stark fell wildly in love with Waymar.[5] Among the brothers of the Night's Watch, Waymar's behavior and appearance earned him some ridicule behind his back, including from Gared and Will.[3]

Shortly before A Song of Ice and Fire begins, Lord Commander Jeor Mormont gave Waymar the command of a ranging in the haunted forest in search of a band of wildling raiders. He was accompanied by Gared and Will. Waymar was the least experienced of the three, having been in the Night's Watch for less than half a year, whereas Jeor counted Gared and Will among his best men. However, Waymar felt it was his due to have a command because he was a knight, and Jeor accepted because he did not want to offend Waymar's father.[4] 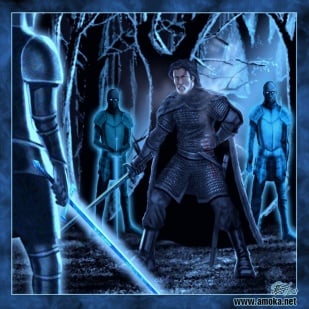 Waymar is attacked by the Others - by Amok ©

On the ninth day of ranging north and northest through the haunted forest, Will discovers a camp of eight immobile wildlings. Gared tries to persuade Ser Waymar to head back to the Wall, but without luck. While they approach the camp, Gared says he can feel something is wrong, but Waymar mocks the experienced ranger. Gared intends to make a fire, arguing that fire can keep some enemies away, but Waymar calls him a fool.[3]

When they are at the wildling camp, Will and Waymar cannot find any bodies. Will climbs a tree to look for them, and both men feel markedly colder. Suddenly, Waymar is surrounded by Others. Though Waymar bravely duels an Other, he is blinded when his longsword shatters, and the group of Others swiftly kill the knight. Will stays in the trees until he is sure that the Others have left. When Will descends, he is attacked and strangled by Waymar, who has been turned into a wight with a blue eye.[3] Gared escapes south of the Wall, but he is executed by Lord Eddard Stark for desertion.[6]

Jeor Mormont, Lord Commander of the Night's Watch, laments to Tyrion Lannister that he gave command to someone as inexperienced as Waymar. Jeor sends Benjen Stark to search for the missing rangers, but Benjen also disappears.[4]

Craster tells Jeor that the three rangers stopped at Craster's Keep during their search for raiders.[7]

As Tormund's free folk pass through the Wall at Castle Black, they surrender treasures to the Night's Watch. One man relinquishes a broken sword with three sapphires in the hilt, possibly Waymar's sword.[8]

I am not going back to Castle Black a failure on my first ranging.[3]

—Waymar to an Other

Ser Waymar had been a Sworn Brother of the Night's Watch for less than half a year, but no one could say he had not prepared for his vocation. At least insofar as his wardrobe was concerned.[3]

He lifted his sword high over his head, defiant. His hands trembled from the weight of it, or perhaps from the cold. Yet in that moment, Will thought, he was a boy no longer, but a man of the Night's Watch.[3]

Too proud to sleep under my roof, him in his sable cloak and black steel. My wives give him big cow eyes all the same.[7]