A Clash of Kings-Chapter 13

Jon Snow helps investigate Whitetree, the fourth abandoned wildling village they have encountered. Lord Commander Jeor Mormont dispatches Jon with a report for Samwell Tarly to send back to Castle Black. After a short talk with Sam, Jon returns to Mormont to discuss how his uncle might have reacted to the abandoned villages. 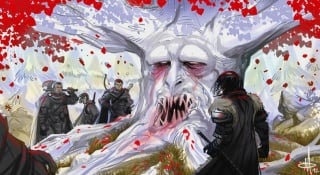 The heart tree of Whitetree - by Matt Olson©

The abandoned village of Whitetree is dominated by the largest tree Jon Snow has ever seen. The weirwood shades the entire village beneath its canopy, but the size does not disturb Jon as much as the face, whose jagged mouth is large enough to swallow a sheep and contains human bones. Lord Commander Mormont notes that the tree is old, and Jon adds that it is powerful as well.

Thoren Smallwood declares he now understands why the men feared the heart trees when they first came to Westeros and cut them down. Jon replies that his father claimed no man could tell a lie in front of a heart tree, and Mormont agrees his father said the same. Mormont asks Jon to retrieve the blackened skull from the ashes. When he reaches in, Jon finds another skull under it. As he examines the skull, Mormont wishes he had asked why the wildlings burn their dead when there were still a few around to ask. Jon remembers the wight he fought and is certain he knows the reason.

Musing on what they might learn if bones could talk, Mormont orders the houses searched. Jon is paired with Eddison Tollett, nicknamed Dolorous Edd. As they search, Dolorous Edd says the dead walking is bad enough, but now Mormont wants them talking, too. The grey-haired squire adds that the dead might lie, or be full of tedious complaints. Entering one of the houses, Jon notes the dirt floor and lack of furnishing and calls it is a dismal place to live. Dolorous Edd replies that he was born in such a house, but then fell on hard times.

They find nothing, as expected. Whitetree is the fourth village they have searched and each has been as empty. When Jon asks what he thinks happened here, Dolorous Edd responds he does not want to imagine. Reemerging, they find Chett using the hounds to search and cursing angrily. When Jon meets Chett's eyes, he can tell there is no love lost between them. Thoren Smallwood, dressed in the late Ser Jaremy Rykker's armor and cloak and looking more lordly than Mormont, declares there were wildlings here a year ago. Jarman Buckwell replies that much can change in a year. Ser Mallador Locke opines that fewer wildlings means fewer worries. Then Bedwyck, a five-foot ranger known as Giant, descends from the giant tree to report a lake to the north and low hill to the west. With three hours of daylight left, Mormont decides to head for the lake to make camp.

After writing a report to Maester Aemon, the Lord Commander sends Jon to find Samwell Tarly to send the message. Jarman Buckwell's scouts ride out first, followed by Thoren Smallwood's vanguard, Mormont's main force, the baggage train under Ser Mallador Locke, and finally the rear guard under Ser Ottyn Wythers; a total of 200 men and 300 horses. As he rides, Jon exercises his scarred fingers to keep his sword hand from growing stiff and clumsy. He is likely to need his sword hand beyond the Wall, especially now. The black brothers left Castle Black in good spirits, but the silence of the wood has unnerved them all. Not only have the wildlings disappeared, but the game as well. Even the veteran rangers agree the haunted forest has never seemed so haunted.

He finds Sam watering the horses who carry the raven cages. A few of the ravens' shrieks sound like words, and Jon asks if Sam is teaching them to speak. Sam explains three of them to say "snow." Jon comments that one bird croaking his name was enough. When Sam asks about Whitetree, Jon gives him Mormont's report. Sam dispatches a raven with the message, lamenting that he wishes it could carry him back as well. When Jon asks about him still being afraid, Sam admits he is not as frightened as he was. At first he could not sleep for fearing every noise was a wildling creeping up to kill him, but now he knows there are no wildlings around. Jon remarks to himself that two hundred brave men left the Wall and only Sam, the self-confessed coward, is growing less afraid.

Sam says he is sore from the rough living, but he is working on his maps. Jon jokingly threatens to volunteer Sam as an outrider, which Sam emphatically protests. Sam then admits he hoped they would stay in the village under a roof. Jon points out that their are not enough houses for everyone and rides off again.

Ghost, who has been hunting well away from the line of march, appears as Jon is swinging wide of the village to avoid the congested column. The white wolf has been having no more luck than the foragers. Jon remembers telling Dywen that their numbers were probably frightening away the game, but Dywen only agreed the game was being frightened by something.

When Jon rejoins Mormont, he mentions that Sam is teaching the ravens to talk. Mormont snorts that he will regret that, as they make a lot of noise but say nothing worth hearing. They ride in silence for a while before Jon comments on what his uncle Benjen would make of the empty villages. Mormont continues Jon's thought that Benjen would have pushed on to find out why, and perhaps someone or something did not want that known. Mormont declares that when Qhorin Halfhand joins them, they will be 300 men and not so easy for an enemy to deal with. He promises Jon that they will find them, but Jon wonders if they will be found instead.