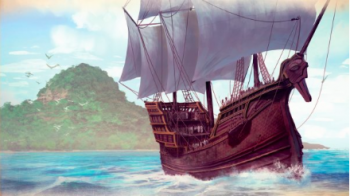 A swan ship is a large ocean-going vessel designed and built in the Summer Isles. Their name in the Seven Kingdoms is due to their large, white sails and figureheads that more often than not depict birds. They sail well and are faster than galleys, but are helpless when becalmed.[1]

Swan ships are believed to have been developed by Xanda Qo, and most swan ships are built on the isle of Koj. Each ship is protected by archers wielding goldenheart bows, so they are rarely attacked by slavers.[2]

There are swan ships in the Ragman's Harbor when Arya Stark arrives at Braavos aboard the Titan's Daughter.[4]

Samwell Tarly sails aboard the Cinnamon Wind, a swan ship captained by Quhuru Mo, when he travels from Braavos to Oldtown.[1] Archmaester Marwyn intends to take the same ship to Meereen to meet Daenerys Targaryen.[5]