From A Wiki of Ice and Fire
Jump to: navigation, search
For other uses, see Wayn (disambiguation).

A wayn is a type of wagon pulled by horses or oxen and generally used for agricultural purposes.[N 1] A typical wayn has four wheels but two-wheeled wayns also exist.[1][2]

The Free Folk from beyond the Wall uses wayns, carts, and sleds to transport their goods.[3]

Wayns, carts, hathays and palanquins are common in the streets of Volantis.[4]

House Wayn of the riverlands and House Waynwood of the Vale of Arryn both depict wheels on their sigil.[5][6] 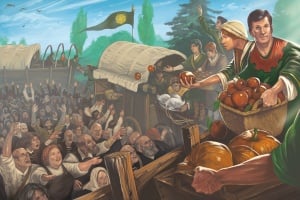 After the Battle of the Blackwater, House Tyrell brings one hundred of wayns laden with food in King's Landing each day.[7]

Robb Stark gives the command of the baggage train of his army to Ser Wendel Manderly when they depart from Riverrun for the Twins to attend the wedding of his uncle, Lord Edmure Tully, and Roslin Frey. The train is composed of a procession of wayns laden with food, fodder, camp supplies and wedding gifts. The heavy rain renders the journey very slow. Half the wayns are abandoned to the muck, and their loads distributed amongst mules and draft horses.[8]

Sandor Clegane steals a wayn from a farmer and use it to infiltrate the Twins with Arya Stark during the Red Wedding.[9]

Two wayns are used to transport Maester Aemon, Samwell Tarly, Gilly and her son, as well as provision for the journey from Castle Black to Eastwatch-by-the-Sea.[10]

Lord Wyman Manderly takes forty wayns laden with food when he leaves White Harbor to attend the wedding of Ramsay Bolton and "Arya Stark" at Winterfell.[11]

The wayns and wagons of the baggage train of Stannis Baratheon's army have difficulty to keep up the pace of the march on Winterfell.[12]