A cart is a two-wheeled vehicle use for the transport of goods. It is pulled by draught animals, such as large dogs,[1] dwarf elephants,[2] horses,[3] mules,[4] and oxen[3] (called an oxcart[5]).

The Free Folk from beyond the Wall uses wayns, sleds, and carts to transport their goods.[6]

Riding in a cart is seen as a weakness by the Dothraki, who prefer horse riding. In their culture, carts are reserved for cripples, eunuchs, pregnant women just before the time of giving birth, the very old or very young people.[7]

Hathays are a type of cart used in Volantis. It is pulled by dwarf elephant and more ornate than Westerosi oxcarts.[2]

After the battle at Rook's Rest, the head of Meleys was brought back to King's Landing by the forces of King Aegon II Targaryen and drawn on a cart through the city, awing the smallfolk into silence.[8][9]

In 132 AC, Lord Benjicot Blackwood's carts were attacked by outlaws while he was on his way to Winterfell for the wedding of his aunt, Lady Alysanne Blackwood, to Cregan Stark the Lord of Winterfell.[10] 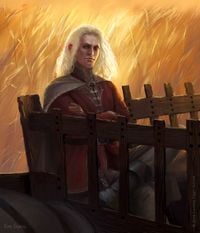 Khal Drogo offers Prince Viserys Targaryen a place in a cart instead of walking on foot. Viserys accepts not knowing this is a great insult in Dothraki culture. This earns Viserys the nickname Khal Rhaggat, the Cart King.[7]

You're bold enough to be a Stark. Yes, I should have come sooner. If not for my Hand, I might not have come at all. Lord Seaworth is a man of humble birth, but he reminded me of my duty, when all I could think of was my rights. I had the cart before the horse, Davos said. I was trying to win the throne to save the kingdom, when I should have been trying to save the kingdom to win the throne.[11]