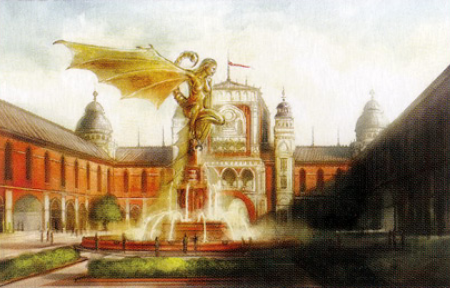 The Plaza of Pride by Tom Garden © Fantasy Flight Games

The Plaza of Pride is a plaza in Astapor. It is an open market where the city's slavers, the Good Masters, take their customers to view their purchases. Its ground is covered in red bricks.

In the center of the plaza stands a red brick fountain with a monstrous hammered bronze harpy rearing twenty feet tall in its middle.[1] It has a woman's face with gilded hair, ivory eyes, and pointed ivory teeth. Yellow water gushes from her heavy breasts, and the water smells of brimstone. In place of arms she has the wings of a bat or a dragon. Her legs are the legs of an eagle and behind she wears a scorpion's curled and venomous tail. Dangling from her talons is a heavy chain, an open manacle at either end.[1]

In Astapor, Daenerys Targaryen goes to the Plaza of Pride to inspect the Unsullied soldiers that she is considering purchasing. A thousand Unsullied have been marched out of their barracks for her inspection and drawn up in ten ranks of one hundred before the fountain and its great bronze harpy. Arstan Whitebeard taps the end of his staff in displeasure on the red bricks as he listens to Kraznys mo Nakloz boast to Daenerys how the Unsullied have been standing in the Plaza of Pride for a day and a night with no food and no water.[1] When Dany returns to buy the Unsullied she and her khalasar head to the Plaza of Punishment.[2]

Tell the Westerosi whore to lower her eyes. I deal in meat not metal. The bronze is not for sale.[1]