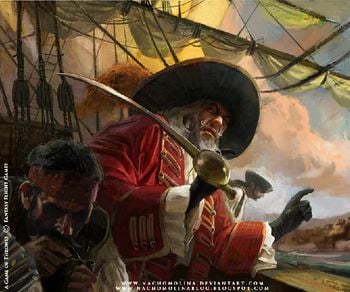 Pirates or corsairs commit acts of robbery or criminal violence at sea, on shore, or in other major bodies of water, such as river or lakes.

Pirates make their dens upon the Stepstones and venture forth to prey on honest men.[1] Some pirates of the Free Cities and the Stepstones can be hired as sellsail companies.[2]

While the Qohorik rule the Qhoyne and the Darkwash north of Ar Noy, pirates are thickest on the rivers between Ar Noy and the Sorrows. There are pirates on Dagger Lake, which is full of islands where pirates lurk in hidden caves and secret strongholds. Pirates do not sail into the Sorrows, and the Rhoyne south of the Sarrows is held by Volantene galleys.[3]

The Basilisk Isles off Sothoryos are a base for corsairs who raid shipping in the Summer Sea for captives to sell as slaves in Meereen, Yunkai, and Astapor.[4][5] The northern coast of Sothoryos is navigable by the corsair's road.[6]

The Ravenry at the Citadel was the stronghold of a pirate lord during the Age of Heroes.[7]

Justin Milk-Eye was a pirate king who fought with Erich VII Durrandon over Massey's Hook.[8]

The Three Sisters have been a favorite haunt of smugglers for hundreds of years, and were pirate nests before that. The ancestors of House Borrell of Sweetsister were pirate kings until the Starks came down on them with fire and sword in the Rape of the Three Sisters.[9] 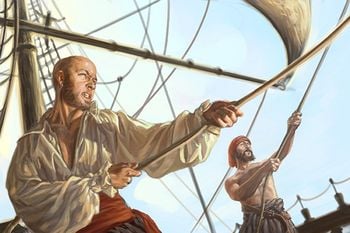 Pirates from the Stepstones attacked Cape Wrath while King Argilac Durrandon was preoccupied with Aegon's Conquest.[10] In 8 AC during the First Dornish War, a pirate king from the Stepstones transported Dornish raiders to attack the cape.[11] Pirates sacked Tall Trees Town in 19 AC.[12]

The author of A Caution for Young Girls claims to have spent time as the plaything of a corsair queen in the Basilisk Isles.[14]

Corsairs from the Pepper Coast and pirates from the Stepstones supported Morion Martell, Prince of Dorne, in the ill-fated Fourth Dornish War in 83 AC.[15] After the Myrish Bloodbath of 91–92 AC, the Archon of Tyrosh allied with pirate kings to force Myrish rogues from the Stepstones. The defeated Myrmen then established themselves as pirates on Tarth.[15]

Racallio Ryndoon claimed the Stepstones for himself during the Daughters' War.[17] At the end of the war, Racallio fled his pirate kingdom[18] for the Basilisk Isles.[19]

Bellegere Otherys, the first Black Pearl of Braavos and the fourth of Aegon IV Targaryen's mistresses, was a pirate queen.[20][21]

Ironborn engaged in piracy during the era of Dagon Greyjoy, Lord of the Iron Islands.[22]

The Old Mother and Samarro Saan were pirates among the Ninepenny Kings.[23]

The Braavosi innkeeper Pynto was formerly a pirate.[24]

Stannis Baratheon hires Salladhor Saan, a Lysene pirate self-styled as the Prince of the Narrow Sea, to provide him with more ships to aid in his battle for the Iron Throne.[25][26]

According to Xaro Xhoan Daxos, the Tourmaline Brotherhood of Qarth is full of pirates.[27]

Three days before Daenerys Targaryen inspects Unsullied in Astapor, a corsair king was interested in purchasing one hundred of the slave soldiers.[28]

Ser Denys Mallister considers the ironborn to be pirates and thieves.[29]

A corsair king has risen in the Basilisk Isles and raided Tall Trees Town in the Summer Isles.[30]

The Cinnamon Wind is attacked by pirates off the Stepstones.[31]

Aurane Waters flees King's Landing with the royal dromonds after the arrest of Queen Cersei Lannister. Grand Maester Pycelle believes that Aurane is sailing to the Stepstones to set himself up as a pirate.[32]

When Quentyn Martell sails incognito on the Meadowlark, pirates come aboard when the ship is anchored off the coast of the Disputed Lands; the crew fends off the pirates off at the cost of twelve lives.[33]

Lady Nymella Toland tells Princess Arianne Martell that a new pirate king, calling himself Lord of the Waters, has set up on Torturer's Deep.[34]

Brothels are a much sounder investment than ships, I've found. Whores seldom sink, and when they are boarded by pirates, why, the pirates pay good coin like everyone else.[35]

When a pirate grows rich enough, they make him a prince.[26]

Illyrio: Autumn is a season rife with storms, and pirates still make their dens upon the Stepstones and venture forth to prey on honest men. It would never do for my little friend to fall into such hands.


Tyrion: There are pirates on the Rhoyne as well.