The Fourteen Flames is an immense chain of volcanoes extending across the now-shattered Valyrian peninsula. There were deep mines beneath the Fourteen Flames, and their fires lit the Valyrian Freehold's nights of old.[1] 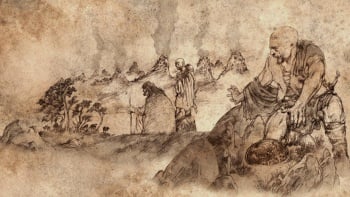 The Valyrians were originally a sheepherding folk of the Valyrian peninsula. When they discovered dragons lairing in the Fourteen Flames, however, their rise to power began. The Valyrians believed that dragons were the children of the volcanoes.[2] Valyria sent slaves of a hundred different nations to the mines beneath the Fourteen Flames, searching for gold,[1] silver,[3] and other ores such as copper, tin, iron.[4] The worst slaves were sent down to die in the red darkness of the mines.[1]

The mines of old Valyria were always hot and they grew hotter as shafts were driven deeper into the earth. The slaves toiled in an oven, the rocks around them too hot to touch. The air stank of brimstone and seared the slaves' lungs as they breathed. Sometimes when they broke through a wall in search of gold, they would find steam, boiling water, or molten rock. Certain shafts were cut so low that slaves had to crawl or bend.[1]

Sometimes firewyrms were encountered in that red darkness, in the shafts of the mines by the slaves, leaving only burnt and blackened corpses, yet still the mines drove deeper. Slaves perished by the score, but their masters did not care.[1]

The Doom of Valyria, an eruption of all of the Fourteen Flames, destroyed the Valyrian Freehold. Great earthquakes destroyed settlements, mountains exploded, and fires burned so hot that even dragons were killed. The Valyrian peninsula became separated from the now-ruined Lands of the Long Summer by the Smoking Sea.[5]

Most believe the Doom was a natural catastrophe, although some such as Barth believe the volcanoes ceased to be restrained by Valyrian magic.[3] Some believe the fires of the Fourteen Flames were controlled by mages, but too many were assassinated when the dragonlords fought each other.[3]

Some of the Fourteen Flames may be submerged in the Smoking Sea.[3] It is said that any sailor who glimpses the fiery mountains of Valyria rising above the waves will soon die a dreadful death.[6]

Most mines are dank and chilly places, cut from cold dead stone, but the Fourteen Flames were living mountains with veins of molten rock and hearts of fire.[1]

Tyrion: So those are fires of the Fourteen Flames we're seeing, reflected on the clouds?
Moqorro: Fourteen or fourteen thousand. What man dares count them? It is not wise for mortals to look too deeply at those fires, my friend. Those are the fires of god's own wrath, and no human flame can match them. We are small creatures, men.[5]