From A Wiki of Ice and Fire
(Redirected from Narrow Sea)
Jump to: navigation, search 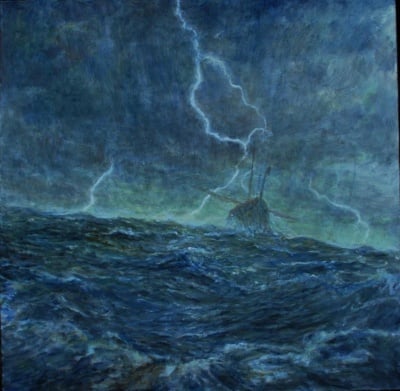 Across the sea by Marc Fishman ©

The narrow sea is the sea between the continent of Westeros to its west and the continent of Essos to its east. The sea is relatively narrow and easy to cross, but large enough to make large-scale invasions and military incursions between the Seven Kingdoms and the Free Cities difficult. There is regular trade across the narrow sea between the two continents and the Port of Ibben.[1][2] Westerosi nobles are sometimes fostered or seek refuge in the cities across the water.[3][4][5][6]

The narrow sea can be rough in autumn, when storms are common. In winter, the storms are worse but less frequent.[7] The stormlands are especially hit hard by storms which develop in the warmer waters of the Summer Sea to the south.[8] It is suggested that a journey from the Shield Islands to the far side of the narrow sea is so hazardous in autumn that two-thirds of a fleet might be lost in the attempt.[9] Trading galleys are sometimes better off crossing in the safety of the Stepstones. 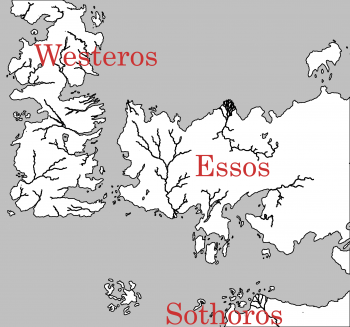 The narrow sea connects the Shivering Sea in the north, the Sea of Dorne in the west, the Sea of Myrth in the east, and the Summer Sea in the south, which it is separated from by the island chain known as the Stepstones.

Located in or near the Bite are the Three Sisters, White Harbor, and Oldcastle. Settlements of the Vale of Arryn along the sea include Old Anchor, Runestone, and Gulltown. Across the Bay of Crabs to the south is Crackclaw Point with the Whispers in the crownlands.

The Gullet separates the narrow sea from Blackwater Bay, upon which are located King's Landing and Duskendale. Lords of the narrow sea sworn to Dragonstone include House Celtigar of Claw Isle, House Velaryon of Driftmark, House Sunglass of Sweetport Sound, and House Bar Emmon of Sharp Point.[14] Further south is Massey's Hook with Stonedance.

The isle of Tarth and the Straits of Tarth separate the narrow sea from Shipbreaker Bay. Located on Tarth is Evenfall Hall. South of Tarth on Cape Wrath in the stormlands are Rain House near the rainwood and the Weeping Town, and nearby is Greenstone on the isle of Estermont.

The Free City of Braavos is located in a lagoon in northwestern Essos, where the narrow sea meets the Shivering Sea. South of Braavos is the Braavosian Coastland, which stetches to Andalos.

The Free City of Tyrosh is located on an island near the Stepstones and the Disputed Lands of southwestern Essos. 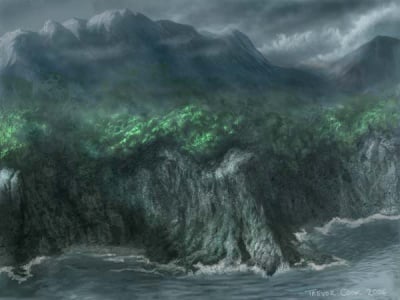 The First Men of antiquity crossed the Arm of Dorne from Essos to Westeros. According to legend, however, the hammer of the waters shattered the land bridge and created the Stepstones between the narrow sea and the Summer Sea.[17]

During the coming of the Andals, longships crossed the narrow sea from Andalos to the east coast of Westeros.[18] When Andals attacked the north, King Theon Stark retaliated by raiding the coast of Andalos.[19] The Wolf's Den was built to protect the White Knife from raiders from the east.[20]

After conquering the Old Empire of Ghis, the Valyrian Freehold expanded west and established several colonies, which are now called the Free Cities.[21] These included Pentos and Myr along the narrow sea and Tyrosh, which was founded to control trade in the Stepstones.[15] Refugees from Valyrian slavery founded Braavos where the narrow sea meets the Shivering Sea.[22]

Princess Nymeria led ten thousand ships of the Rhoynar across the narrow sea to Dorne after the Valyrians defeated them in the Rhoynish Wars.[23][24]

Overcoming the resistance of the local lords of the narrow sea, Dragonstone was raised as the westernmost outpost of the Valyrian Freehold two centuries before the Doom of Valyria.[25] Having resettled at Dragonstone before the Doom, the Targaryens controlled the skies above the narrow sea with their dragons, while the fleets of their Valyrian allies, the Velaryons and Celtigars, controlled the middle region of the sea. Aegon the Conqueror formed a new realm, the Seven Kingdoms, through the Conquest.[26] The Company of the Rose chose to exile themselves across the sea rather than remain in Westeros.[15]

King's Landing, Aegon's new capital on Blackwater Bay, grew to surpass Duskendale as the largest Westerosi port of the narrow sea.[26] Prince Maegor Targaryen fled across the sea to Pentos in 40 AC after refusing to put aside Alys Harroway, but Maegor returned to claim the Iron Throne two years after the passing of his brother, King Aenys I Targaryen.[3]

Lord Rogar Baratheon considered extending the Iron Throne's power across the sea by having King Jaehaerys I Targaryen wed the daughter of the Archon of Tyrosh, but the king instead wed his sister, Alysanne Targaryen.[27] Agents and informers throughout the narrow sea sought Elissa Farman after she fled Dragonstone with three dragon eggs.[28] In 58 AC Jaehaerys hosted the Archon of Tyrosh and the Prince of Pentos in King's Landing to resolve a war which had disrupted trade in the narrow sea.[28]

The Triarchy, formed in 96 AC, conquered the Stepstones and killed hundreds of pirates among the islands.[16] While sailing from King's Landing to Lys, the pregnant Mysaria, paramour of Prince Daemon Targaryen, lost her child during a storm in 105 AC.[16] Westerosi had come to resent the tolls imposed on merchants by the Triarchy in the past decade. Daemon and Lord Corlys Velaryon began a war for the Stepstones against the Triarchy in 106 AC, and three years later Daemon was crowned King of the Stepstones and the Narrow Sea. Daemon eventually abandoned his island kingdom, however.[16] According to Septon Eustace, Ser Criston Cole unsuccessfully begged sixteen-year-old Princess Rhaenyra Targaryen to flee across the narrow sea with him in 113 AC.[16]

The shy dragon Grey Ghost hunted fish in the narrow sea.[29] When the Dance of the Dragons broke out, Ser Tyland Lannister appealed across the narrow sea for aid, and the Triarchy eventually decided to aid the greens against the blacks. Heavy losses in the Battle of the Gullet led to the collapse of the Triarchy, with the Daughters' War breaking out in the narrow sea after the murder of Sharako Lohar.[29][30] Near the end of the Dance, Tyland, Ser Marston Waters, and Ser Julian Wormwood were sent across the sea in seek of sellswords in the Free Cities.[31] In the aftermath of the civil war, the Wolf Pack and the Stormbreakers crossed the narrow sea to serve as adventurous sellswords in Essos.[30] Racallio Ryndoon, self-styled King of the Narrow Sea, fled for the Basilisk Isles.[32] Roggerio Rogare sailed Mermaid's Daughter up and down the narrow sea after the Lysene Spring.[32]

Following the tourney at Ashford Meadow, Prince Aerion Targaryen was sent by his father, Prince Maekar Targaryen, to reside at Lys for a few years.[4]

Doran Martell, Prince of Dorne, sent his brother Oberyn across the sea to Lys after Lord Edgar Yronwood died in a duel.[35]

In the aftermath of Robert's Rebellion, the fleet of House Targaryen at Dragonstone was destroyed by a fierce storm. Viserys and Daenerys Targaryen were smuggled across the narrow sea by Ser Willem Darry before the assault on Dragonstone.[36] Daenerys spent much of her childhood fleeing across the sea from one city to the next.[37]

Ser Rodrik Cassel is seasick while traveling on the rough narrow sea from White Harbor to King's Landing.[38] 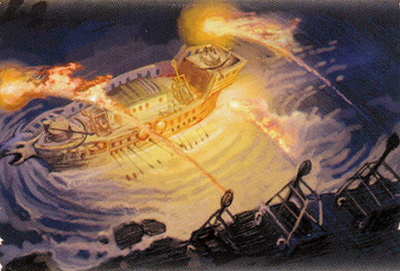 Stannis Baratheon hires sellswords from Lys and Myr across the narrow sea to support his claim in the War of the Five Kings.[40] Stannis sends Ser Davos Seaworth on Black Betha and Allard Seaworth on Lady Marya to spread word of his claim to both coasts of the sea.[41] The pirate and sellsail Salladhor Saan styles himself Prince of the Narrow Sea.[41]

Stannis's royal fleet sails from Storm's End to King's Landing before the Battle of the Blackwater, but the ships are scattered and delayed by a storm in the narrow sea.[42]

Stannis grants the title of Admiral of the Narrow Sea to Davos.[44] Davos sends Edric Storm from Dragonstone to the Free Cities to protect him from Melisandre.[45] Stannis's remaining ships carry him from Dragonstone north to Eastwatch-by-the-Sea for the defense of the Wall.[46]

Arya Stark sails on the Titan's Daughter from Saltpans to Braavos.[47]

Word spreads across the narrow sea that Queen Regent Cersei Lannister seeks her brother, Tyrion Lannister, and will reward his captor with a lordship.[48]

The raid on Saltpans occurs when some of the Brave Companions are unable to find transport across the sea.[49]

With Oldtown his destination, Samwell Tarly sails on Blackbird from Eastwatch to Braavos,[7] and then on Cinnamon Wind from Braavos to Pentos, Tyrosh, and past the Stepstones to the Summer Sea.[50]

Eastwatch at the Wall[12] and Arnolf Karstark of Karhold[52] report of savage storms in the narrow sea. Salladhor's Lysene fleet is scattered by storms in the narrow sea while sailing south from Eastwatch.[53] Storms also scatter the sellsword fleet of Aegon Targaryen during the landing of the Golden Company in the stormlands.[54]

Robert: This Khal Drogo is said to have a hundred thousand men in his horde. What would Jon say to that?
Eddard: He would say that even a million Dothraki are no threat to the realm, so long as they remain on the other side of the narrow sea. The barbarians have no ships. They hate and fear the open sea.[55]

—Robert I Baratheon and Eddard Stark

Your Grace. You mock me with a king's style, yet what am I king of? Dragonstone and a few rocks in the narrow sea, there is my kingdom.[40]

Autumn in the narrow sea could often be wet and rainy, he remembered from years past.[56]

Words are wind, and the wind that blows exiles across the narrow sea seldom blows them back.[57]