Chroyane is a foggy, ruined city of Rhoynish origin that sits in the southern Sorrows at the confluence of the Lhorulu and the Rhoyne, south of the Golden Fields in Essos.[1]

Chroyane of old was said to have streets made of water and houses of gold.[2] It now contains sunken statues and temples, green obelisks, upended trees, and broken spires and marble stairs. Two places of note are the island ruins of the Palace of Love, now called the Palace of Sorrow, and the Bridge of Dream, where stone men tend to roam.[3] 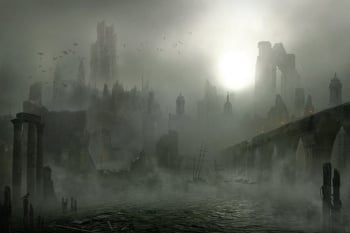 The Chroyane, as depicted by Philip Straub in The World of Ice & Fire

Chroyane, nicknamed the festival city, was once the richest and most splendid of the cities along the Rhoyne. It contained the colossal Palace of Love, a magnificent fastness.[3]

According to legend, Prince Garin the Great of Chroyane gathered a quarter million soldiers in his city during the Second Spice War. The Rhoynar marched south and were victorious against Selhorys, Valysar, and Volon Therys, but were then defeated by the dragonlords of the Valyrian Freehold in a great battle along the Rhoyne.[4] Men of Volantis and Valyria hung Garin in a golden cage and brought him to Chroyane so he could witness the city's destruction. Garin allegedly called upon Mother Rhoyne to destroy the invaders with a curse, and that night the river's waters rose to destroy the Volantenes and Valyrians. The spirits of the drowned dragonlords are said to remain beneath the water, however, and their cold breath rises to become fog.[3][4]

Mists now rule the Sorrows and people infected with greyscale roam the ruins. They are called stone men, and the mists are said to be ruled by the enigmatic Shrouded Lord.[3] Sunken architecture and statues pose threats to passing boats. Many travelers become lost in the thick fog, eventually succumbing to madness, hunger, greyscale, or stone men.

There has not been law above the Sorrows for a thousand years, so pirates are common in the Rhoyne north of Chroyane, although they do not enter the ruined city.[3] Volantene galleys patrol the river south of Chroyane.[2] Thrice yearly the triarchs of Volantis send a mercy galley to aid the stone men, but sometimes the ships arrive with more victims than food.[3]

Lomas Longstrider met descendants of the Rhoynar in the ruins of Chroyane.[5]

Tyrion Lannister travels with the crew of the Shy Maid through Chroyane, meeting the Kingfisher and observing the Palace of Sorrow. They sail unscathed beneath the Bridge of Dream, but despite sailing with the current of the Rhoyne, they appear to approach the Bridge of Dream again shortly afterward. They are attacked by stone men during their second voyage past the bridge. Tyrion saves Young Griff from a stone man, but is dragged into the cold Rhoyne.[3] Griff rescues Tyrion from drowning, but Tyrion's savior is later revealed to have been infected with greyscale in the process.[6]

Many a voyager has been lost here, poleboats and pirates and great river galleys too. They wander forlorn through the mists, searching for a sun they cannot find until madness or hunger claim their lives. There are restless spirits in the air here and tormented souls below the water.[3]

This was the most beautiful city on the river, and the richest. Chroyane, the festival city.[3]

Too rich, too beautiful. It is never wise to tempt the dragons.[3]

Chapters that take place in Chroyane