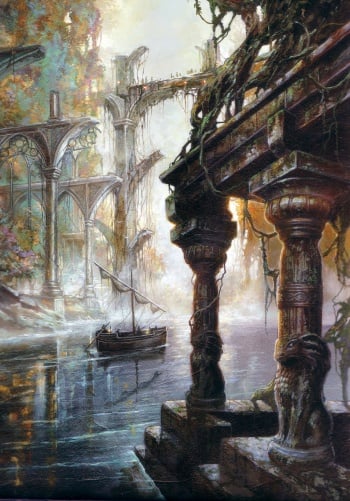 The Shy Maid approaches the Bridge of Dream, as depicted by Didier Graffet for the 2017 ASOIAF Calendar

The Bridge of Dream is a large ruined bridge in southern Chroyane, along the river Rhoyne. It is often inhabited by stone men.[1]

Like the rest of the Sorrows, the bridge is cloaked in fog. Rising forty feet above the river, the bridge extends from the Palace of Sorrow to the Rhoyne's western bank. It has many pale stone arches, which have mostly collapsed due to the weight of the grey moss that drapes them and the thick black vines that grow upward from the water. Curtains of grey fungus also loom around the bridge. Around its piers, the water ripples white.[1]

The broad wooden span of the bridge has rotted through. There is a ragged row of beacon lamps along the bridge, some of which are still aglow.[1]

Prior to its destruction, only the Bridge of Dream rivaled the Long Bridge of Volantis.[2]

As the Shy Maid and her crew journey to Volantis along the Rhoyne, the pole-boat passes under the Bridge of Dream. The crew are apprehensive, as they can see stone men shuffling around the glowing lamps and hear a faint, high wail coming through the fog just as they are about to pass underneath. However, most of the stone men take no notice, and the pole-boat passes without incident.

Once they are clear of the bridge, Tyrion Lannister reveals that he knows who Young Griff really is. Tyrion also reveals his true identity to Young Griff. Just as Tyrion is puzzling out who Griff is and Varys's involvement, the crew realize that due to inexplicable circumstances the Bridge of Dream is up ahead yet again.

The pole-boat passes under the bridge again shortly afterwards. This time three stone men jump and land on the boat. The crew fights them off, but as Tyrion knocks the last one off, it grabs him and pulls him down into the Rhoyne as well.[1]

The Bridge of Dream, Griff called it, but this dream was smashed and broken.

Tyrion: The Bridge of Dream.
Haldon: Inconceivable. We've left the bridge behind. Rivers only run one way.[1]