From A Wiki of Ice and Fire
Jump to: navigation, search
For other characters with the same name, see Walda Frey.

Walda Frey, known as Fat Walda, is the second daughter of Merrett Frey and Mariya Darry, and a granddaughter of Lord Walder Frey, the head of House Frey.[4]

In the television adaptation Game of Thrones, Walda is portrayed by Elizabeth Webster.[5]

Walda is a short, large girl with watery eyes, three chins, a huge bosom, and blonde hair.[2][6] Her voice is fluttering and squeaky.[2] 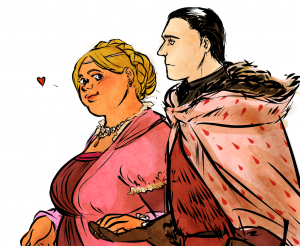 Walda weds Roose Bolton,[7] Lord of the Dreadfort, at the Twins.[1] While Roose holds Harrenhal, Walda frequently sends letters to him which he reads and then burns without reply. Roose allows his cupbearer "Nan", actually an incognito Arya Stark, to read the letters.[8]

Roose reveals to Ser Jaime Lannister that Walder Frey, Lord of the Crossing, had offered Roose his prospective bride's weight in silver for her dowry. Lord Bolton chose the fattest available female member of House Frey.[1]

During the feast at the Twins after the wedding of Lord Edmure Tully and Roslin Frey, Walda tells Ser Wendel Manderly she is glad to have been chosen by Roose. She leaves the hall during the bedding custom and is not present for the Red Wedding massacre.[2]

In the aftermath of the Red Wedding, Walda's father Merrett is hanged by the brotherhood without banners at Oldstones.[9]

Walda travels north with her husband along with his army and her kin, Ser Aenys and Ser Hosteen Frey. She meets her stepson, Ramsay Bolton, and Theon Greyjoy after the siege of Moat Cailin is resolved.[6] At Barrowton Roose tells Theon he expects Ramsay will kill any sons birthed by Walda.[10]

Walda is present at the wedding of Ramsay and "Arya Stark", actually Jeyne Poole, at Winterfell's godswood. During the wedding feast she has three slices of pork pie.[11]

As Winterfell becomes snowbound by a blizzard, Theon notices that Walda is pregnant. Her younger brother, Little Walder Frey, is found murdered at Winterfell.[12]

I pray for you morn, noon, and night, my sweet lord, and count the days until you share my bed again. Return to me soon, and I will give you many trueborn sons to take the place of your dear Domeric and rule the Dreadfort after you.[8]

My lord grandfather offered Roose his bride's weight in silver as a dowry, though, so my lord of Bolton picked me. I weigh six stone more than Fair Walda, but that was the first time I was glad of it. I'm Lady Bolton now and my cousin's still a maid, and she'll be nineteen soon, poor thing.[2]

Fat Walda was a round pink butterball of a girl with watery blue eyes, limp yellow hair, and a huge bosom, yet her voice was a fluttering squeak. It was hard to picture her in the Dreadfort in her pink lace and cape of vair.[2]

He picked her because she's fat. You think Bolton gave a mummer's fart that she was your whelp? Think he sat about thinking, 'Heh, Merrett Muttonhead, that's the very man I need for a good-father'? Your Walda's a sow in silk, that's why he picked her, and I'm not like to thank you for it. We'd have had the same alliance at half the price if your little porkling put down her spoon from time to time.[9]

Lady Walda is a Frey, and she has a fertile feel to her. I have become oddly fond of my fat little wife. The two before her never made a sound in bed, but this one squeals and shudders. I find that quite endearing. If she pops out sons the way she pops in tarts, the Dreadfort will soon be overrun with Boltons. Ramsay will kill them all, of course. That's for the best. I will not live long enough to see new sons to manhood, and boy lords are the bane of any House. Walda will grieve to see them die, though.[10]