From A Wiki of Ice and Fire
(Redirected from Hunting Hounds of Ramsay Bolton)
Jump to: navigation, search 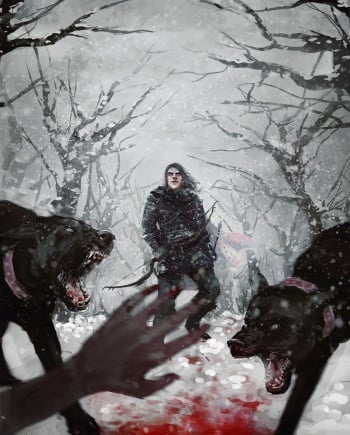 Ramsay Bolton and his hounds - by GibiLynx © The "bastard's girls" is the name given to Ramsay Bolton's pack of hunting hounds by Theon Greyjoy.[1]

The pack is made up of all vicious, mean tempered bitches. The dogs are looked after by the kennelmaster Ben Bones, who under Ramsay's instructions also trained them to kill wolves.[2]

Ramsay uses the hounds to hunt peasant women. He releases them naked into the woods, giving them half a day's head start. When he catches them he rapes and kills them. Those that give him good sport are given a quick death, and Ramsay names a new bitch pup after the woman. Those that do not are denied a quick death, instead being flayed alive, and no pup is named after them. He feeds their corpses to his dogs.[3][2]

Ramsay will use your women as his prey. He'll hunt them down, rape them, and feed their corpses to his dogs. If they lead him a good chase, he may name his next litter of bitches after them.[7]