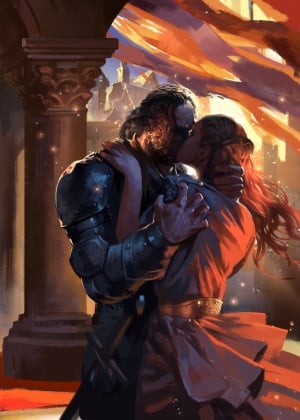 "The Hound and the little bird", by zippo514©, depicting the kiss that never was 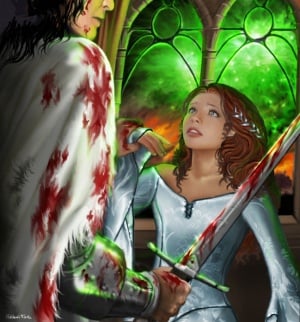 The UnKiss is the nickname given by fans of A Song of Ice and Fire for a kiss remembered by Sansa Stark between her and Sandor Clegane, but which did not actually happen.

When asked about this discrepancy George R. R. Martin said this will eventually mean something and that Sansa is an "unreliable narrator". This has led to much speculation by fans on what he means and intends. 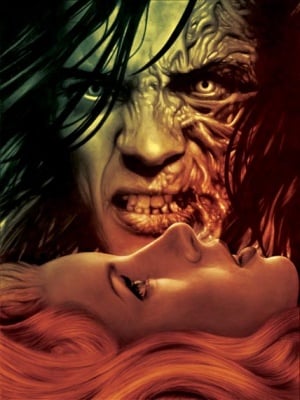 Towards the end of the battle of the Blackwater, Sandor Clegane, whose courage had broken during the fighting, finds his way to Sansa Stark's bedroom. He lies down on her bed and falls asleep waiting for her.

Sansa eventually arrives. The Hound is very drunk, drunker than she had ever seen him. He offers to take Sansa with him as he intends to flee the city. He mentions going north somewhere. She does not understand what he means. He pushes her on her bed, holds a dagger to her throat, and drunkenly demands that she sing him the song that she had promised him earlier. Sansa is too terrified to remember the words of the song of Florian and Jonquil, but instead sings the Mother's Hymn:

Gentle Mother, font of mercy,
save our sons from war, we pray,
stay the swords and stay the arrows,
let them know a better day.
Gentle Mother, strength of women,
help our daughters through this fray,
soothe the wrath and tame the fury,
teach us all a kinder way.[1]

The Hound falls silent and removes the dagger from her throat, and Sansa gently touches his cheek, feeling a wetness that was blood and a wetness that was not blood (tears). Shortly thereafter he gets up, rips off his bloody white cloak, and leaves. Sansa shakes out the torn and bloody cloak, and huddles beneath it, shivering. Ser Dontos Hollard eventually comes to tell her the battle is won and the city is saved.[1]

Megga couldn't sing, but she was mad to be kissed. She and Alla played a kissing game sometimes, she confessed, but it wasn't the same as kissing a man, much less a king. Sansa wondered what Megga would think about kissing the Hound, as she had. He'd come to her the night of the battle stinking of wine and blood. He kissed me and threatened to kill me, and made me sing him a song.[2]

In contrast, as he lies dying, Sandor thinks of the song Sansa had sung to him but does not mention a kiss. He tells Arya Stark:

And the little bird, your pretty sister, I stood there in my white cloak and let them beat her. I took the bloody song, she never gave it. I meant to take her too. I should have. I should have fucked her bloody and ripped her heart out before leaving her for that dwarf.[3]

In the Eyrie, Sansa Stark again remembers the (un)kiss in some detail:

As the boy's lips touched her own she found herself thinking of another kiss. She could still remember how it felt, when his cruel mouth pressed down on her own. He had come to Sansa in the darkness as green fire filled the sky. He took a song and a kiss, and left me nothing but a bloody cloak.[4]

Sansa thinks of the (un)kiss again when she's asked if she knows what goes on in a marriage bed:

She thought of Tyrion, and of the Hound and how he’d kissed her, and gave a nod.[4]

You will see, in A STORM OF SWORDS and later volumes, that Sansa remembers the Hound kissing her the night he came to her bedroom... but if you look at the scene, he never does. That will eventually mean something, but just now it's a subtle touch, something most of the readers may not even pick up on.[5]

File this one under "unreliable narrator" and feel free to ponder its meaning...[6]