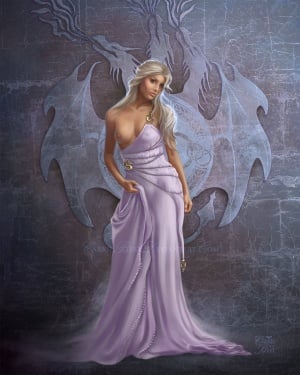 Daenerys in a Qartheen gown - by Carrie Best© 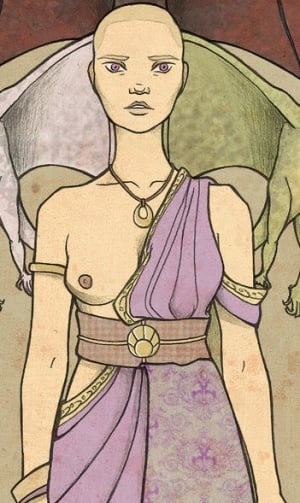 Short-haired Daenerys in a Qartheen gown - by Mustamirri ©

A Qartheen gown is a dress worn by Qartheen women. The dress leaves one breast bare. Daenerys Targaryen adopted the style during her stay in Qarth and still wears this manner of gown on occasion.

When Daenerys Targaryen first enters the city of Qarth she notices that the Qartheen women are wearing gowns that leave one breast bare. [1]

Later for the audience with the Pureborn in the Hall of a Thousand Thrones Daenerys has to garb herself in Qartheen fashion, as Xaro Xhoan Daxos warns her that the Enthroned will never listen to a Dothraki, so she takes care to go before them in flowing green samite Qartheen gown.

While in the House of the Undying Daenerys sees a false vision of the Undying Ones - a great hall and a splendor of wizards. When a kingly man in rich robes tells Dany (falsely) that they are the Undying of Qarth there is a woman beside him who then tells Dany that they have long awaited her. Dany notices that the woman clad in rose and silver and that the breast she has left bare in the Qartheen fashion is as perfect as a breast could be. Shortly thereafter, after discovering the real Undying Ones, Dany sees that one of them, an ancient woman seated on the opposite side of the table, is wearing a gown of pale silk that as rotted on her body, one withered breast is left bare in the Qartheen manner. [2]

When Dany decides that she and her people must flee Qarth she goes down to the docks to seek ships passage dressed in Dothraki fashion. That morning Irri had brought her a Qartheen gown to wear, an airy confection of ivory samite patterned with seed pearls, but Dany refused it, telling Irri that the docks are no place for a lady's finery. [3]

In Astapor, so as not to seem a beggar, Daenerys wears a Qartheen gown and her crown when she goes to make an offer to the Good Masters of Astapor for all 8,600 Unsullied, plus all the slave boys in training. The gown is a deep violet silk, which brings out the purple of her eyes. [4]

During Xaro Xhoan Daxos’s visit to Meereen Dany dons a Qartheen gown in his honour. [5]