From A Wiki of Ice and Fire
(Redirected from Violet eyes)
Jump to: navigation, search 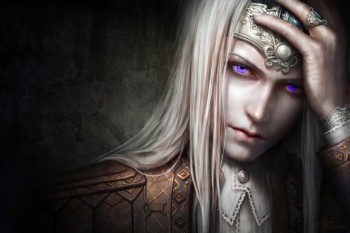 Purple eyes of different shades are exhibited by some characters in the world of George R. R. Martin's A Song of Ice and Fire.

The most well-known shade of purple eyes is violet. Two other shades are lilac and indigo. It is a rare and beautiful eye color, but is relatively common in the Targaryen family, who are descended from the dragonlords of the ancient Valyrian Freehold. In Westeros, few but the "blood of the dragon" have purple eyes.

The blood of old Valyria is often manifested by eyes in shades of purple, and hair of silver-gold or platinum white. This coloring was typical among Valyrians, and is often held up as proof that Valyrians are not entirely of the same blood as other men.[1]

Striking lilac or indigo or violet eyes are typical Targaryen features, and a famous proclamation of their Valyrian heritage. Their practice of incest was kept in part to preserve their rare coloring.

The famed Targaryen eye color can be revealing when a member of the family is trying to be incognito. Prince Aegon Targaryen, while serving as a squire toSer Duncan the Tall under the name "Egg", shaved his head so that his silver-gold hair would not be recognized. His deep purple eyes could not be disguised, though in dim light they looked black.[2] Daemon II Blackfyre, incognito as the hedge knight "John the Fiddler", wore blue clothing to help make his purple eyes look blue.[3]

Note that not all Targaryens have purple eyes: Queen Alysanne Targaryen's eyes were clear blue,[6] and Prince Valarr Targaryen's eyes were also blue.[7] Children of Targaryen/non-Targaryen marriages may also have eyes of a non-Valyrian color. For example, Prince Baelor, whose mother was Myriah Martell, had brown eyes.[8]

Despite their mixed parentage, Targaryen bastards may still have purple eyes, including Ser Aegor Rivers (though his hair was black),[9] and some dragonseeds.[10]

House Blackfyre was founded by Daemon Blackfyre, the legitimized bastard son of King Aegon IV Targaryen. Among the traits passed on to the Blackfyres by the Targaryens were the platinum blond hair and purple eyes.[3][11]

House Velaryon of Driftmark is an ancient and proud house, with the blood of old Valyria in its veins.[12][13] Velaryons, like the Targaryens, often have the Valyrian features of silver hair and purple eyes.[13] 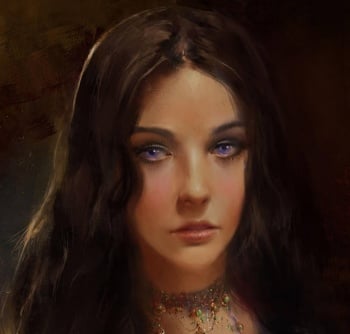 The trait for violet eyes runs in House Dayne, though it is an unusual eye color for non-Valyrians in Westeros. Ashara Dayne in particular was famous for her haunting violet eyes.[14][15] George R. R. Martin has stated that the Dayne purple eye color is not related to Targaryen ancestry.[16]

Where the blood of the old Valyrian Freehold runs strong, purple eyes and silver hair can still be found. In Lys, even the smallfolk and prostitutes often have the pale skin, silver-gold hair, and the purple, lilac, and pale blue eyes of the dragonlords.[17] Some Lyseni with purple eyes include Larra Rogare and Lysono Maar.

The Forest of Qohor contains a species of lemur with silver fur and purple eyes.[18] They are sometimes called Little Valyrians.[19]

Characters stated to have purple eyes 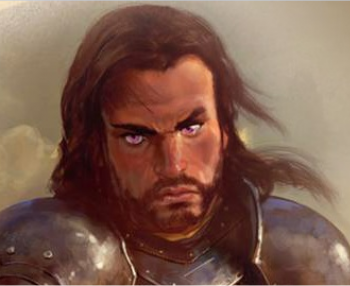 Egg had big eyes, and somehow his shaven head made them look even larger. In the dimness of the lamplit cellar they looked black, but in better light their true color could be seen: deep and dark and purple. Valyrian eyes.[2]

Look at her. That silver-gold hair, those purple eyes... she is the blood of old Valyria, no doubt, no doubt...[5]

Even after all these years, Ser Barristan could still recall Ashara's smile, the sound of her laughter. He had only to close his eyes to see her, with her long dark hair tumbling about her shoulders and those haunting purple eyes. Daenerys has the same eyes. Sometimes when the queen looked at him, he felt as if he were looking at Ashara's daughter ...[15]