Vaegon, born Prince Vaegon Targaryen, was an archmaester of the Citadel.[1] He was the seventhborn child of King Jaehaerys I Targaryen and Queen Alysanne Targaryen.[4] He was also called Vaegon the Dragonless.[5]

Vaegon had the silver-gold hair and purple eyes of the Targaryens. However, he could not be described as "comely": he had a long face and round shoulders, even at a young age. He always had a pinched sour cast to his mouth.[2]

Vaegon was never robust. People considered him to be sour. He was not a coward, but neither took joy from the play of squires and pages. He was a miserable fighter, and not well-trained at arms. He was a bookish boy and much preferred the library, where he could often be found. Books were his only passion.[2]

Vaegon was quiet and wary as a boy.[2] Even as a child, Vaegon was not well-liked, something which did not change over time. When he had to speak he was often blunt, though never intentionally cruel: he always dutifully performed perfunctory courtesies, but no more.[5]

Near the age of forty, Vaegon had become pale and frail. He was devoted to alchemy, astronomy, mathematics, and other arcane arts.[5]

As an archmaester at the Citadel, Vaegon held the ring, rod, and mask of yellow gold.[5][N 1]

Vaegon was born in 63 AC as the fourth son and seventh child of King Jaehaerys I Targaryen and Queen Alysanne Targaryen.[2]

King Jaehaerys and Queen Alysanne assumed that Vaegon would one day marry his sister Daella, who was only one year younger than him. When Vaegon was five years old, Jaehaerys told him to be kind to Daella, as she would one day become “his Alysanne”. However, as time passed it became clear that the two children did not like one another. Vaegon tolerated Daella's presence, but no more, and considered her to be stupid. Daella, on the other hand, was frightened of Vaegon, and considered him to be mean. Although Jaehaerys believed that the two children would eventually warm to one another, in truth their dislike only increased.[2]

In 73 AC, one of Queen Alysanne's companions asked Vaegon and Daella when they would be wed. Vaegon's public reaction was a grave insult to Daella, insisting that she needed to find a husband who wanted stupid children, as those were the only kind she would be able to birth. After Daella fled the hall in tears, Vaegon's older sister Alyssa emptied a flagon of wine over Vaegon's head, which did not impress him. Instead, Vaegon simply told his sister that she had wasted Arbor gold, before leaving to change his clothing.[2]

Following this incident, Jaehaerys and Alysanne agreed that they would need to find other spouses for Vaegon and Daella. Vaegon's other sisters, Saera and Viserra, were briefly considered. King Jaehaerys decided that Vaegon would benefit from spending less time in the library, and asked his elder son Baelon to train Vaegon at arms. Baelon trained Vaegon for a year, during which time both were miserable. One day, Baelon brought their sister Alyssa, dressed in mail, onto the yard as a challenger to Vaegon. Still recalling the incident with the Arbor gold, Alyssa laughed and mocked as she humiliated Vaegon in the yard, as Princess Daella looked on down at them from the castle. When he could take no more, Vaegon threw down his sword and left the yard forever.[2] 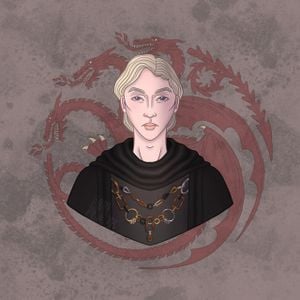 On Vaegon's fifteenth name day in 78 AC, Jaehaerys and Alysanne asked Grand Maester Elysar whether Vaegon might be a maester. Although the maester firmly replied "no", he did confess that Vaegon might have what it takes to become an archmaester. As such, three days later, Vaegon was summoned to King Jaehaerys's solar, where he was told that he would be taking ship for Oldtown within a fortnight. Although Vaegon responded curtly to his father, King Jaehaerys would later tell Queen Alysanne that he thought Vaegon had almost smiled.[2]

At the Citadel of Oldtown, Vaegon would become an archmaester, holding the ring and rod and mask of yellow gold.[5] Although he would write to his parents on occasion, his words dutiful, there was no warmth to the letters.[2] By the end of Jaehaerys's reign, Vaegon's existence had been largely forgotten by most of the Seven Kingdoms. After the death of Prince Baelon, King Jaehaerys I's heir to the throne, King Jaehaerys summoned Vaegon back to King's Landing. According to some, Jaehaerys summoned Vaegon to offer him the throne (which Vaegon refused), according to others Jaehaerys only sought Vaegon's counsel on the matter of succession. It was Vaegon who eventually suggested that the king should call a Great Council to settle the issue.[5]

No further mention is made of Vaegon after the Great Council of 101 AC, as he apparently returned to obscurity in his studies at the Citadel. It is unknown if he was still alive during the Dance of the Dragons, though it is not implausible: he was only 38 years old at the time of the Great Council, and would have been 66 years old by the outbreak of the civil war in 129 AC. For that matter, the first volume of Archmaester Glydayn's history Fire and Blood stops in 136 AC, when the long regency of Aegon III ended - at which time Vaegon would have been 73 years old. It's possible that Vaegon's ultimate fate is detailed on the second volume of Gyldayn's history, at some point later in the reign of Aegon III.