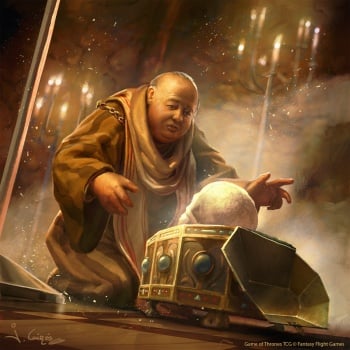 The Mountain's skull is an enormous human skull reputed to be the skull of the deceased Ser Gregor Clegane.[1] The skull's brow shelf is thick and heavy, the is jaw massive. It looks as if it is grinning.[1]

Ser Gregor Clegane slowly dies after having been poisoned with manticore venom by Oberyn Martell during their trial by combat.[2][3] Queen Regent Cersei Lannister instructs Qyburn to bring her the head of the Mountain once he is dead, as Lord Tywin Lannister had promised it to Doran Martell, Prince of Dorne,[3] as recompense for the deaths of Elia Martell and her children, Rhaenys and Aegon Targaryen.[2] Qyburn has beetles strip the flesh from the skull.[4] However, Pycelle had previously noted that maggots wouldn't eat Clegane's mortified flesh and leeches died after feeding on his infected blood.[5] 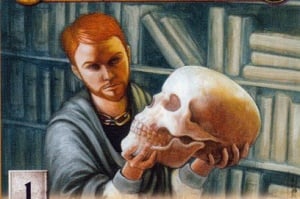 The alleged skull of Gregor is brought to Sunspear by Ser Balon Swann of the Kingsguard, contained in an ebony chest with silver clasps and hinges. The skull rests on a bed of black felt.[1]

It is presented, prior to a seven course feast, to Prince Doran Martell, Princess Arianne Martell, and the eldest of Oberyn's eight bastard daughters: Obara, Nymeria, and Tyene. Doran commands that the skull be placed on a column of black marble. Areo Hotah observes the skull and thinks he has never seen a larger one.[1]

The feast commences and continues late into the night, presided over by the grinning skull on its pillar of black marble. Spun-sugar skulls are served, which displeases Balon. After the feast is done Maester Caleotte hurries behind Doran's wheelchair cradling the Mountain's skull as if it were a child.[1]

In Doran's solar, Obara wonders why the skull was stripped to the bone. Doran notes that the skull is large and Tyene confirms that if the poison used by her father, Oberyn, broke the Mountain's skin, then Gregor is dead. Obara gives the skull a mocking kiss.[1]

Qyburn: I am sorry that it took so long. Such a large head. It took the beetles many hours to clean the flesh. By way of pardon, I have lined a box of ebony and silver with felt, to make a fitting presentation for the skull.
Cersei: A cloth sack would serve as well. Prince Doran wants his head. He won't give a fig what sort of box it comes in.[4]

No one saw the Mountain die, and no one saw his head removed. That troubles me, I confess, but what could the bitch queen hope to accomplish by deceiving us? If Gregor Clegane is alive, soon or late the truth will out. The man was eight feet tall, there is not another like him in Westeros. If any such appears again Cersei Lannister will be exposed as a liar before all the Seven Kingdoms. She would be an utter fool to risk that. What could she hope to gain?[1]

Cersei sent us a head. We should send her back a bag of them.[1]