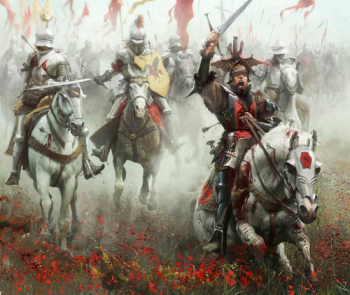 The reign of Daeron II's father, King Aegon IV Targaryen, had been a corrupt one. Aegon and Daeron often found themselves at different ends of an argument, and eventually rumors were spread by Aegon himself that Daeron had been fathered by Prince Aemon "the Dragonknight", suggesting that Daeron was a bastard. Regardless, Daeron was never disinherited by his father. At the same time, Aegon showed favor to one of his bastard children: a boy named Daemon Waters, fathered upon his cousin Daena Targaryen. Aegon IV gave the Valyrian steel sword Blackfyre to the twelve year old Daemon and openly acknowledged him. There were some who believed that the sword, which had been passed on from king to king since Aegon the Conqueror, symbolized the monarchy, and so the public gift of the sword eventually started to whispers that Daemon should be king instead of Daeron II.

Further disagreement in the realm arose because of the increased influence the Dornish had at the court of Daeron II. Daeron's queen was Princess Myriah Martell of Dorne, and Daeron himself had brought Dorne into the realm by marrying his sister Daenerys to Myriah's brother Maron the Prince of Dorne. Some lords, however, longed back to the days when the Dornish had been their enemies on the battlefield, and not their enemies at court. All in all, lords who found any cause to disagree with Daeron's rule began to gather around the bastard-born Daemon, who had taken his the surname "Blackfyre" from his Valyrian steel sword.

In early 196 AC the war began. It would last nearly a year, and divide the Seven Kingdoms. Read more...