From A Wiki of Ice and Fire
(Redirected from King-beyond-the-Wall)
Jump to: navigation, search 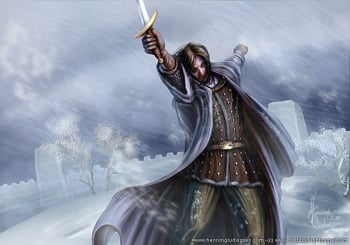 King-Beyond-the-Wall,[1][2] or King-beyond-the-Wall,[3] or King Beyond the Wall,[4] is the title given to a person who has united the many tribes of free folk (or wildlings) who dwell beyond the Wall. Despite its name, the title is not a hereditary or absolute position. It is not a position of any authority except that of the person who can establish it through persuasion and force. For long periods of time there have been no recognized kings.

The free folk leaders have been described in Maester Herryk's History of the Kings-Beyond-the-Wall.[5]

Joramun, the legendary first King-Beyond-the-Wall,[2] was a contemporary of the Night's King, the thirteenth Lord Commander of the Night's Watch. Together with the King of Winter Brandon the Breaker they defeated the Night's King.[6][7] Another story tells of how he found the Horn of Winter and woke the giants.[8][9]

The brothers Gendel and Gorne were joint kings some three thousand years ago. They made a tunnel under the Wall and invaded the north. Gorne managed to slay the Stark king but was killed by his son and heir. According to the people of the north Gendel and the remaining wildling army were killed by the armies of the Starks, the Night's Watch, and the Umbers. In the free folk stories, Gendel led his people back to the tunnels, but they could not find the exit. His children and descendents are said to still live underground, and are always hungry.[10]

The Horned Lord is said to have used magic to pass the Wall a thousand years after Gendel and Gorne.[2]

Bael the Bard was a famous bard, raider and womanizer. According to free folk legend, he went to Winterfell as a bard and impregnated the daughter of the lord. When he was king, he led the free folk against the Wall, where he was killed by his own son, who had inherited Winterfell. Later, his son was skinned by the Boltons in their centuries-long struggle for dominance with the Starks.[11]

In 81 AC, the fourteen-year-old Princess Saera Targaryen wanted to be a queen. She proposed several suitors, amongst them the King Beyond the Wall, to make it possible.[4]

Mance Rayder, the most recent King-Beyond-the-Wall, is a man who competed against multiple other contenders, bribing and bargaining with the many tribes to recognize him as their leader.[9][13]

One of the goals of the great ranging of the Night's Watch is to defeat Mance Rayder.[14]

Mance leads a great host of free folk against the Wall, but is defeated by the Watch and Stannis Baratheon.[13]