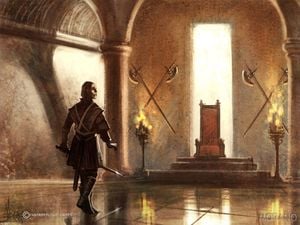 A wandering crow at a southron court, by Tomasz Jedruszek © Fantasy Flight Games

A wandering crow is a recruiter for the Night's Watch. Members of the black brothers are sometimes called crows, and their recruiters are allowed to travel the Seven Kingdoms seeking new members.[1]

The decline in prestige of the Night's Watch has led to fewer members of the nobility agreeing to join.[2][3] Wandering crows thus have had more success convincing those of lesser means to take the black, including youths, and they also seek recruits from dungeons with the approval of authorities.[4][5]